I bought three boxes of cards at the Expo. One box of 2015 UD CFL. One box of 2008-09 Victory (as promised in one of my repack posts), and a box of 12-13 Limited. Because the latter was cheap, and sometimes it is fun to bust a hit-based product. 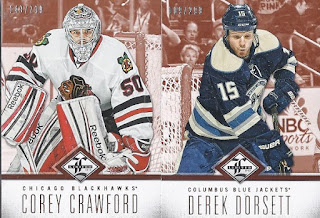 I can say for sure one of these was not the extra card, as these were the two base cards I was promised. The Crawford is a nice card for my mask binder, but I'm somewhat surprised by the Dorsett. While it is interesting to see a tough guy type get a card in this, he doesn't seem to be the type featured in a product with a smaller base make-up. Still kinda cool though. At least he's still playing in the NHL, racking up PIM in Vancouver. 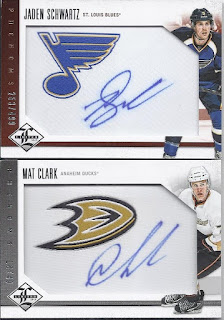 These two auto patches are technically part of the base. Since the box promised 3 hits, with at least one being an auto, I guess I ended up on the upper end of that. Jaden isn't the major hit that he once was, but it is still a nice looking card. He had an OK start to the season, but is now out until February or so after ankle surgery. The Clark is a silver parallel. He's now in the Avalanche system. 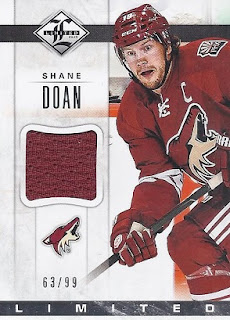 And here's the other promised. A plain one-colour swatch, but the derpy look on Doan is more memorable than the relic. 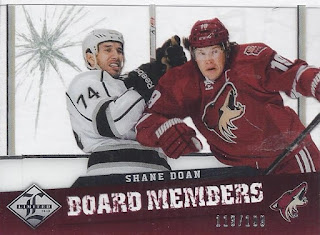 A Shane Doan hot box! This card is acetate, although only the glass portion of the card is clear. But, that's pretty appropriate. Shane also goes 2-for-2 in terms of unflattering photos. 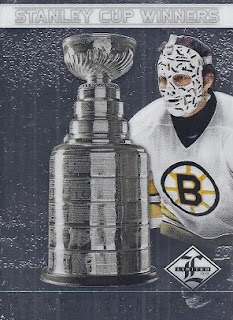 This is one of those cards where the foilness of them makes them challenging to read. Thankfully, the mask makes it obvious that it is Gerry Cheevers without having to play around with getting the right angle. 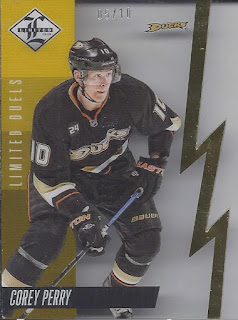 And my lowest numbered card of the break is the /10 gold parallel of Corey Perry. The jagged portion at the side is supposed to join with another player. If the numbers are supposed to match, it was Patrick Kane.

My faves of the bunch are not the hits, but the Cheevers and the acetate Doan. So, while not a big money box, a couple really nice keepers make it still pleasant.

And I can celebrate going to the Expo and not picking up a box of S1.

Posted by buckstorecards at 08:04