Since he just debuted for the Dallas Stars, he hasn't got his official NHL card yet. Despite that fact, his ITG card where he's still on the Kitchener Rangers makes him an addition to their alumni collection. 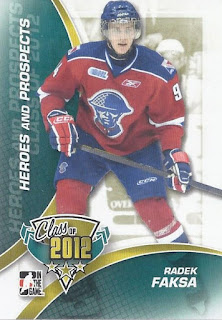 And as a bonus for Remembrance Day, he's wearing one of their Remembrance Day uniform variations. These actually made an appearance on a lot of ITG cards in that season's releases. I guess their photographers was only in town that one day.
Posted by buckstorecards at 06:19