I was planning on doing this Sunday, but since that's also Wrestlemania, I'll be busting a pack of WWE 2015 to celebrate. So, I'll continue on with the latest envelopes from Michigan instead.

Today, all the football, leaving the basketball and hockey for the last post, whenever that may be. 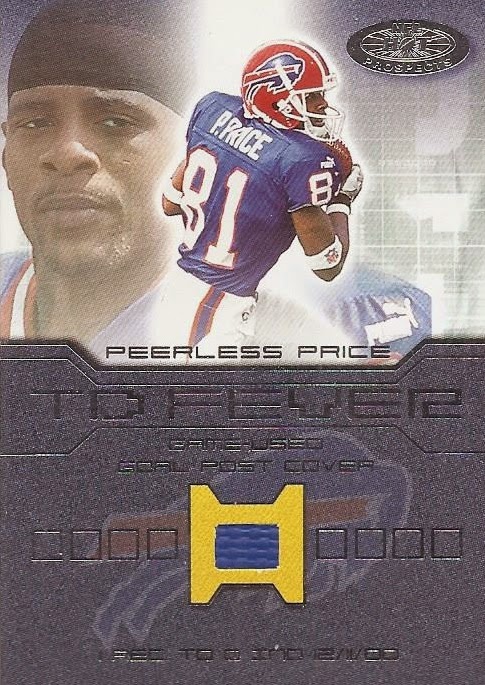 It always amazes me what can be cut up and put into a card. If you can't read it through the foil, that piece of blue isn't from a jersey - it is from the goalpost padding at the RCA Dome in Indianapolis. But, getting a Price relic reminded me of some football game I played with questionable licensing - meaning the Bills WR corps featured the great Sterling Cost. 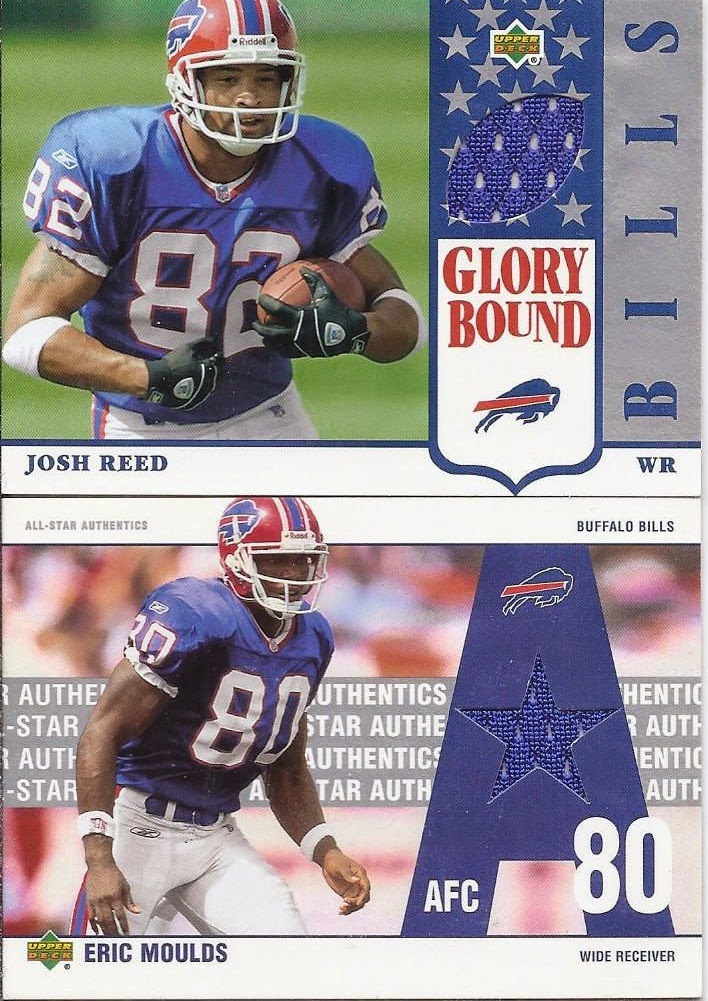 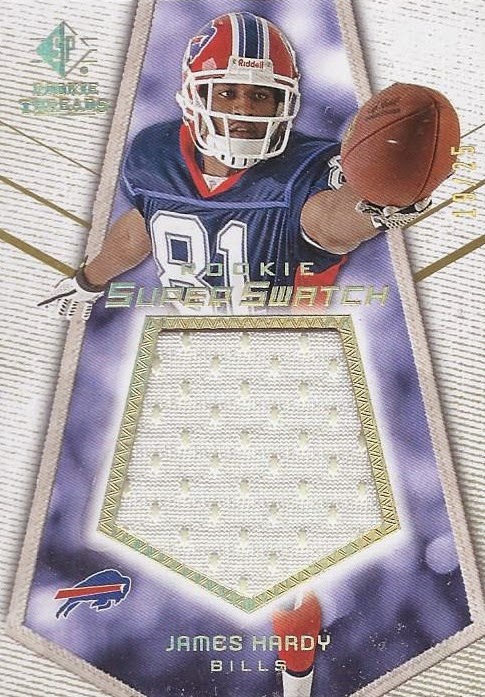 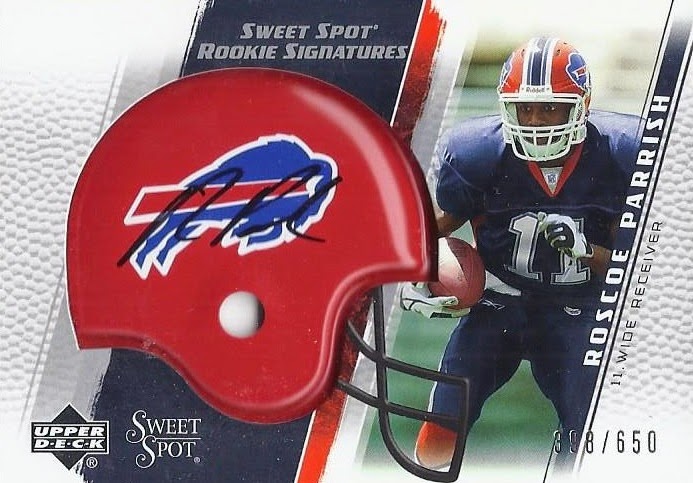 And one last WR hit, this time a manu-relic with the autograph of Roscoe Parrish. 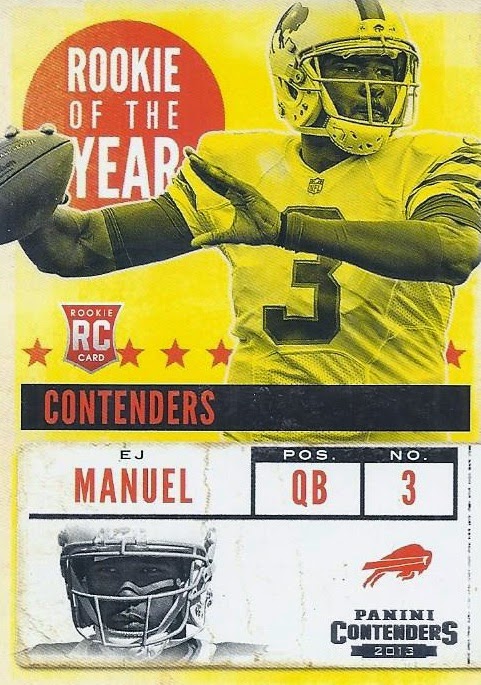 From Rookie of the Year Contender in 2013 sets, to "backup of whatever the hell we find on the QB scrap heap" in '14 and '15. Ouch. I'm glad the defense looks strong. 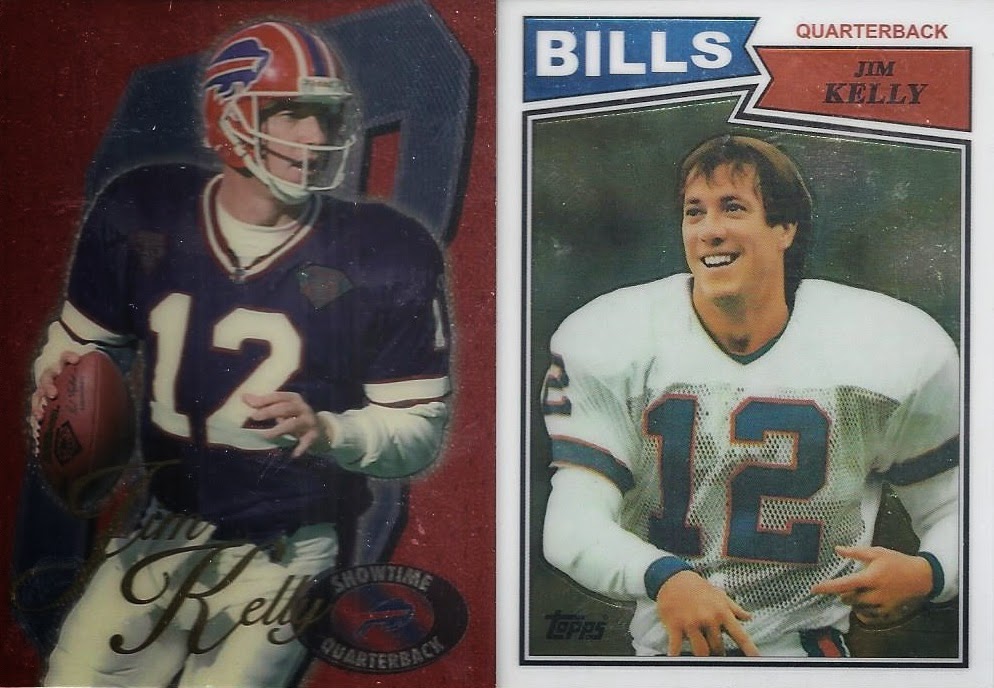 The best thing about Jim Kelly cards is that if they're dupes, I can put them in either the Bills or 2/14 binder. These are going into the the former. 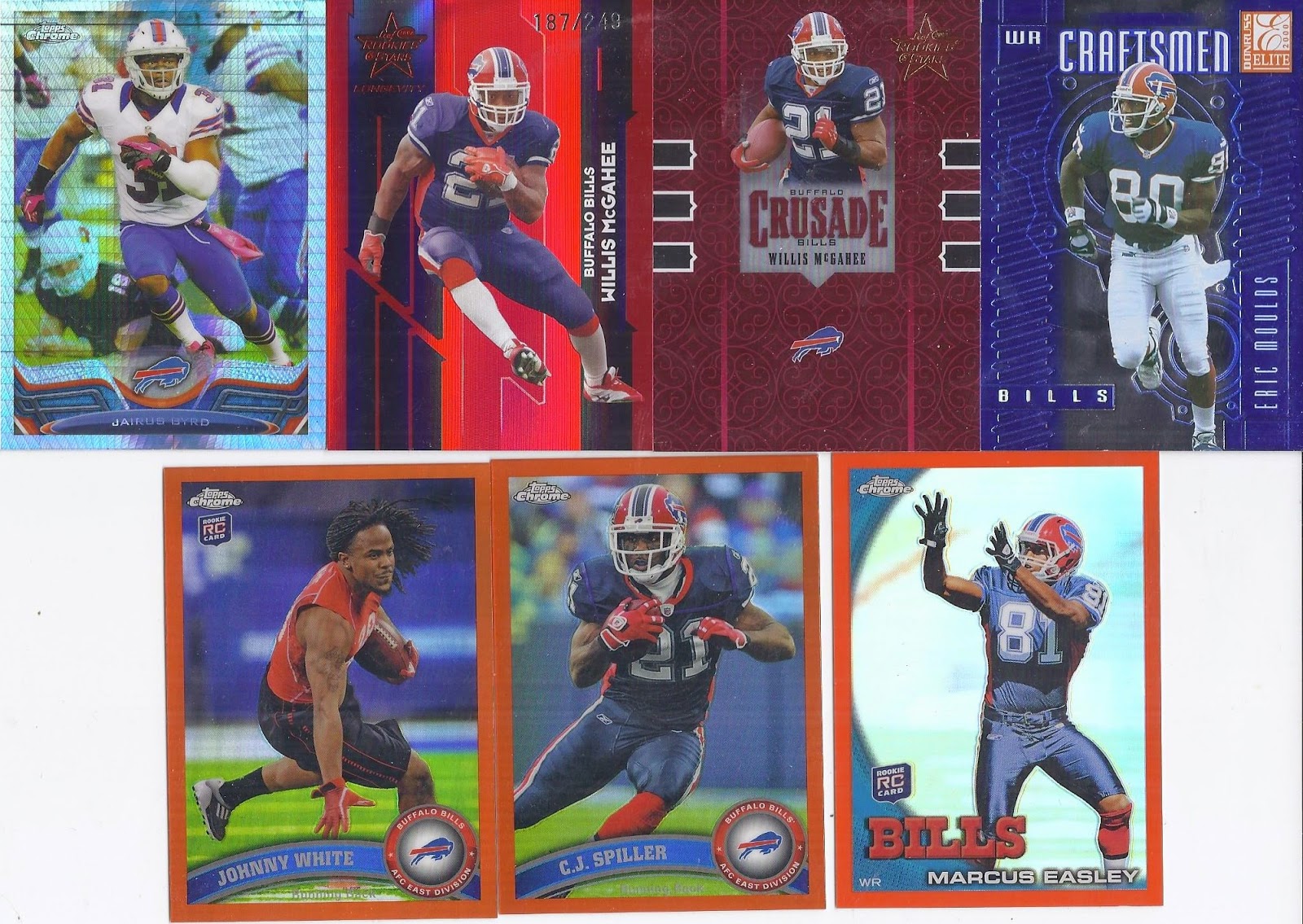 And finally, a who bunch of shiny cards. The orange are unnumbered retail parallels, while the top are numbered to 260, 249, 1250 and 2500 respectively. 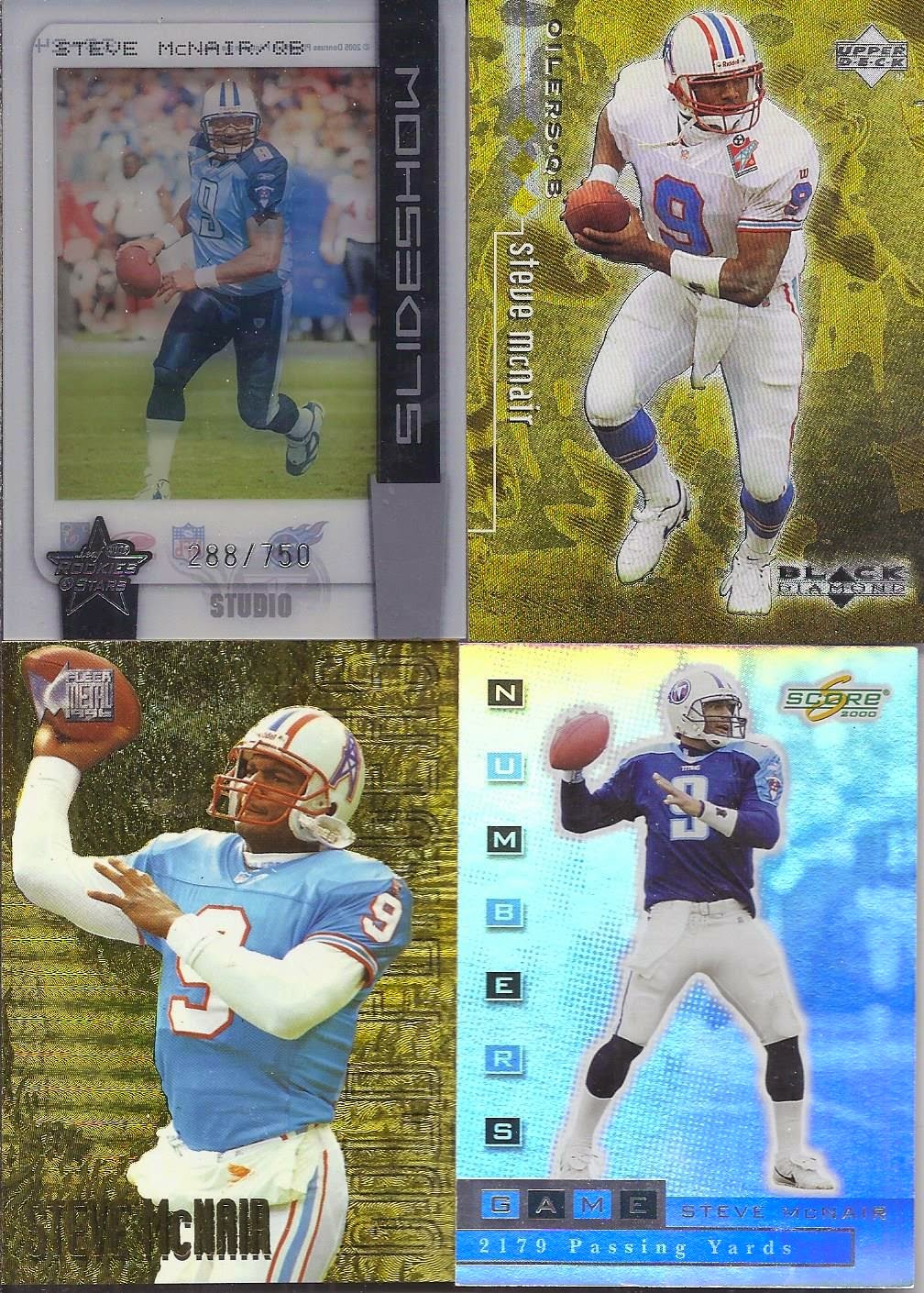 And to wrap up the football, here's 4 new additions to the Steve McNair portion of the 2/14 collection. The lower left card has the most groan-inducing subset name I've come across in a bit - Gold Flingers. Steve is now solidly in 2nd place for football cards with 27 cards, a 3 card lead over Drew Bledsoe. 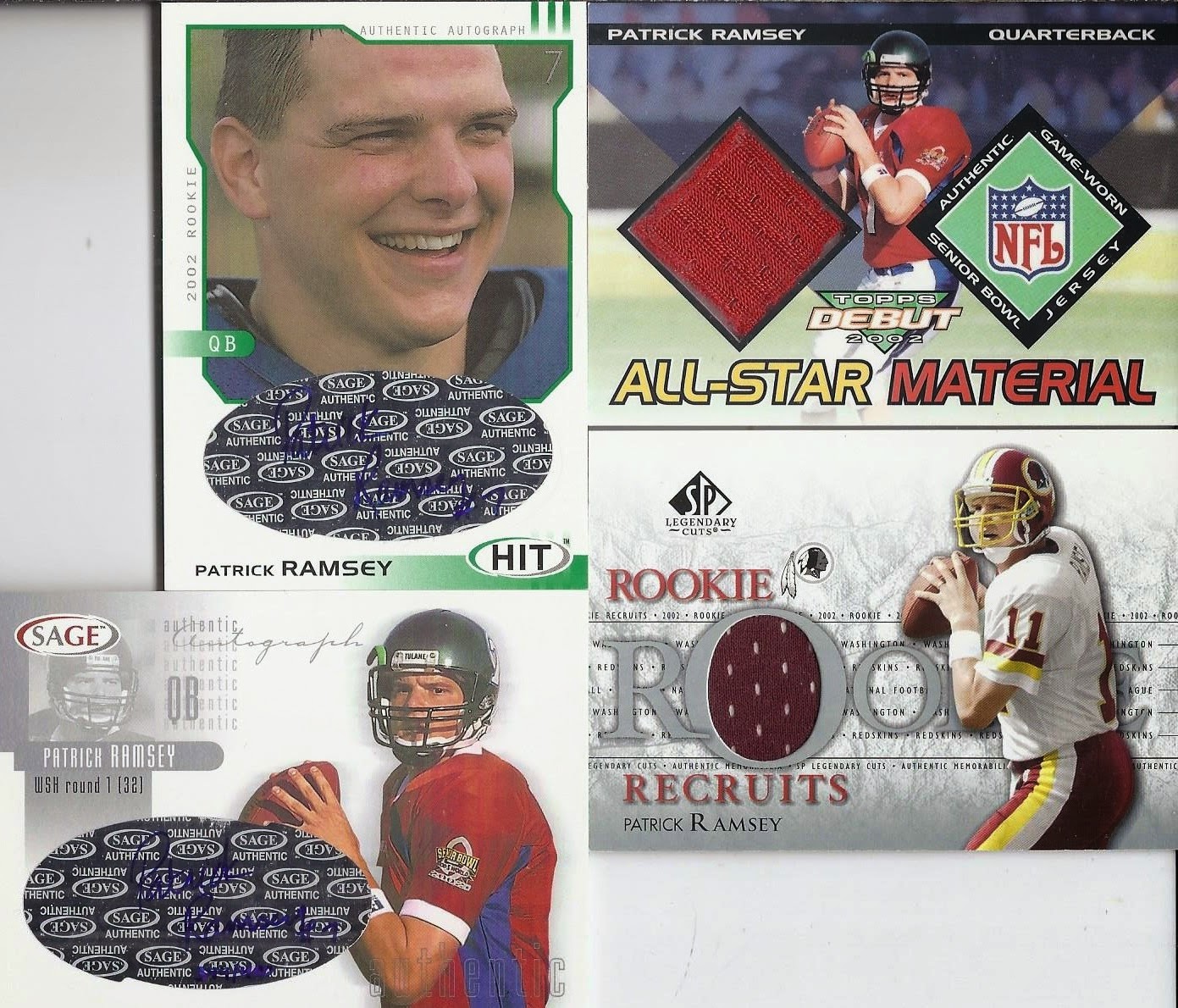 And to wrap this up, my Patrick Ramsey collection has exploded in terms of hits with these 4. The best thing is that, although you can't tell from the scan, his penmanship will contend with Darius Songaila for the best in the collection.

And that's another portion of the trade box. Thanks for these, Dennis! I've already got something nice for your next envelope, but I don't think I'll be sending it until after the Expo in early May.
Posted by buckstorecards at 13:26