I hit the LCS this morning...one that I've found Opening Day at before. Alas, that wasn't happening as that product was nowhere to be found on their shelves. Since I couldn't leave empty handed, I had to get a pack of something. I have some '15 Donruss on the way, so the only other option there for new stuff was this: 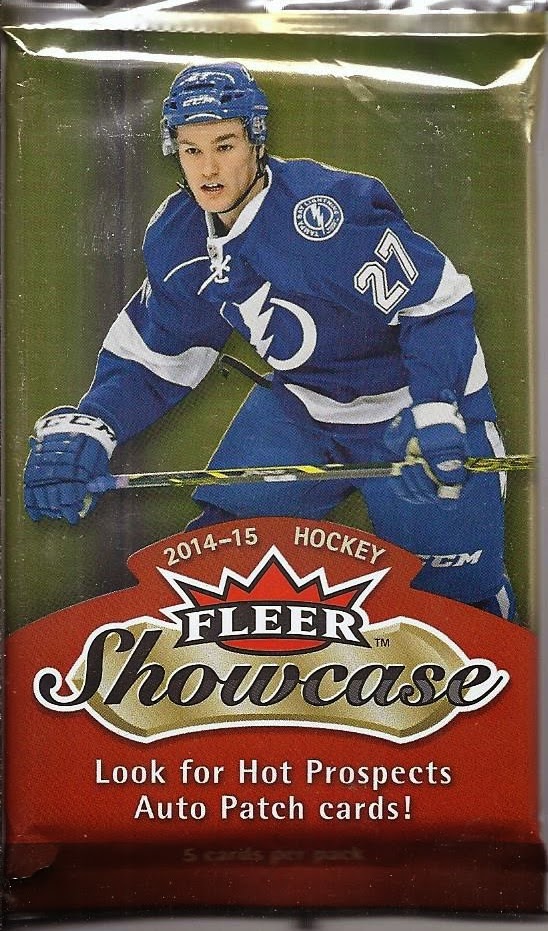 One of these. Your standard Upper Deck mid-range release with 5 cards, usually with 4 being base and one being an insert/parallel of some sort. It is also kinda nice to see a cover boy other than the usual ones for this release.

So, I'll start with my base cards. 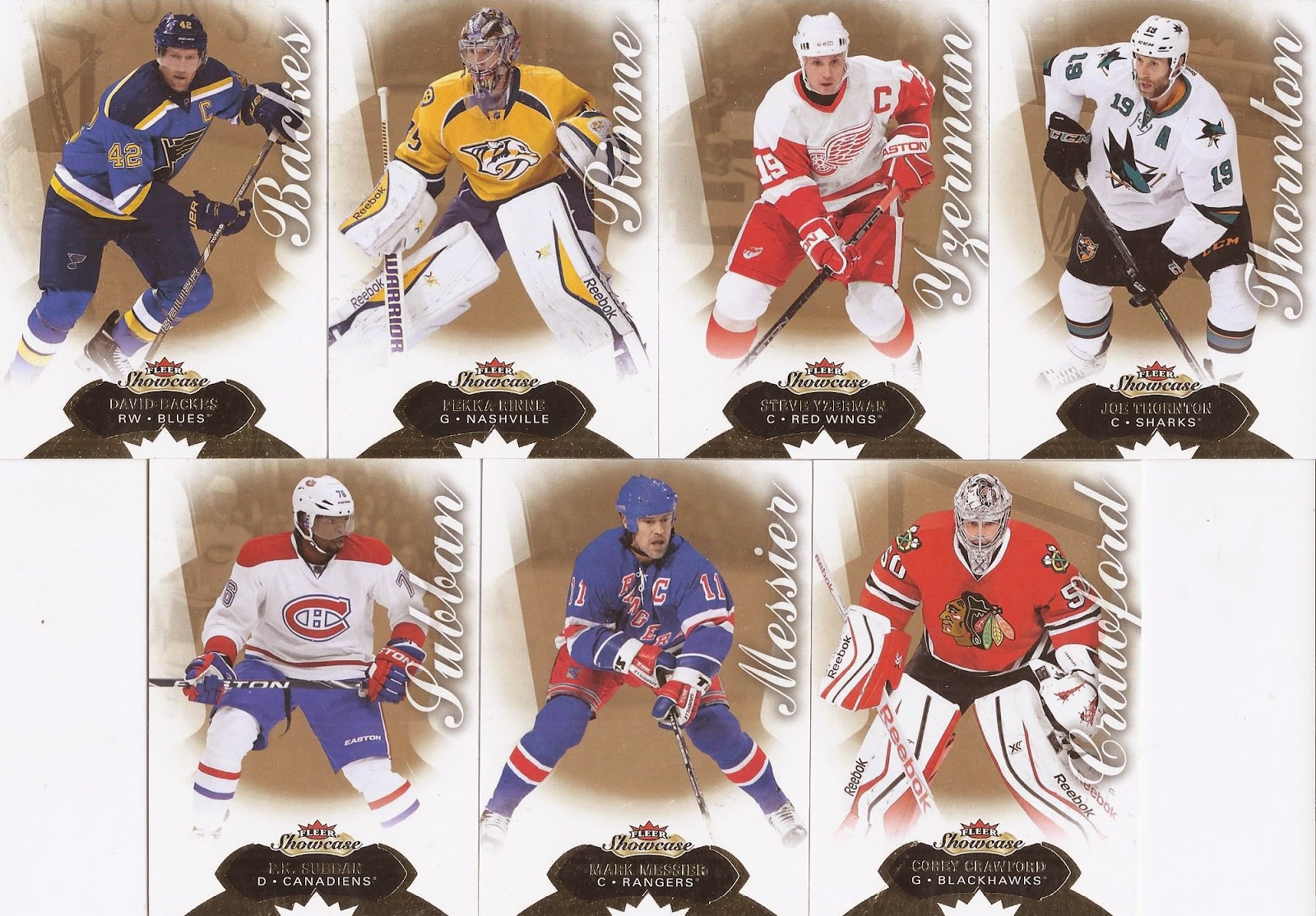 For those of you that are horrible at math, that's 7 base cards in a 5 card pack. I'll give my hypothesis on why that is when I get to my final card. Of all these type of releases, this might be my favourite of the year in terms of design. The background isn't completely obliterated, which is always a plus for me, and the scripted last name on the side really gives it a feel of a higher-end product. The foil on the name is my only beef, but since it isn't silver, it tends to show up nicer in the scan. 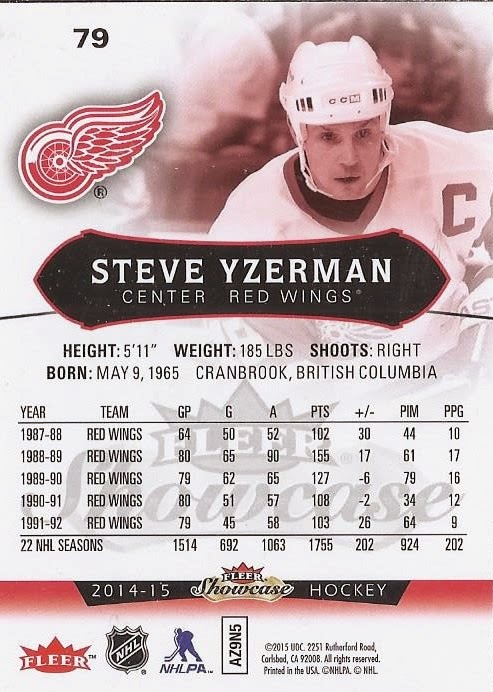 The backs. Standard UD hockey back for their non-flagship/OPC sets with reduced stats and a reused photo albeit shaded in the teams colours.

That's it for the base, but since 2/14 baby Milan Hejduk has both a base and a Flair insert in this set, I'll still have a couple cards I'll wait until the Expo to chase down.

And the 8th card in a supposed 5 card pack? 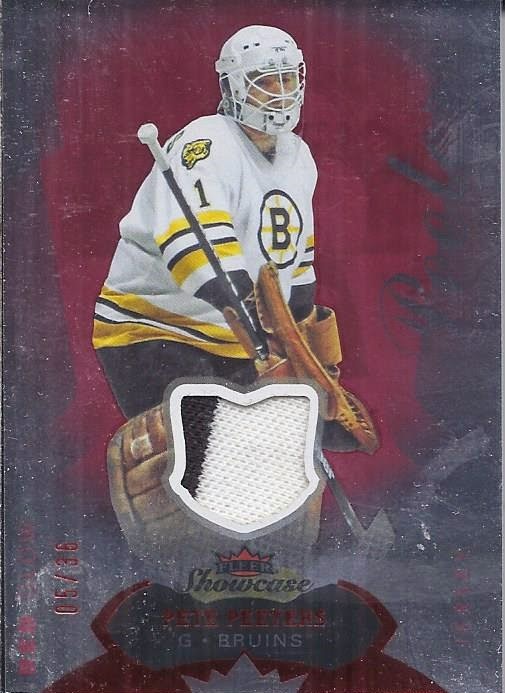 How about a nice two-colour relic numbered to 36? The red makes it really hard to read, but this is a card of Pete Peeters. Actually, this is a red glow base parallel of Pete. This is a really cool pull, being of someone without a whole lot of relic hits available. Searching ebay shows nothing of that nature prior to releases from this season, coming from this set as well as SP Game-Used. These also seem to be a very tough pull, since I watched a half-dozen box breaks on youtube, only to see one of these parallel hits pulled from them.

Pretty good card for just one pack. A definite keeper for me!

As to my hypothesis why there were additional base cards. This hit doesn't seem as thick as the more common auto/patches that are in these packs. It also isn't as thick as their dummy cards. So, in order to disguise the fact this pack contains one of these low-numbered parallels, they add some extra base. 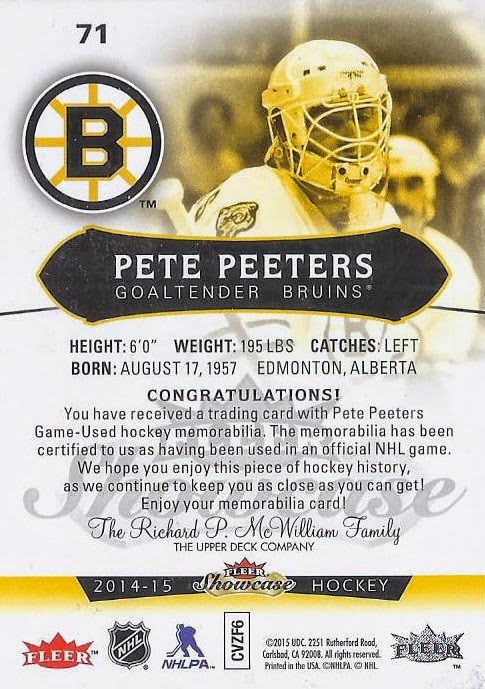 And this is my first "Richard P. McWilliam Family" relic card as well. WOO-HOO?