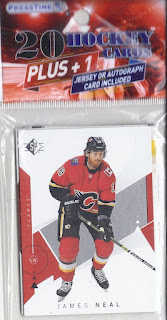 Hanging around the 7/11 was this hanger. This means that there were two hangers there that had a James Neal card as the opener. But we have different teams and different sets (this one is regular SP), so we still have the variety of the repack. 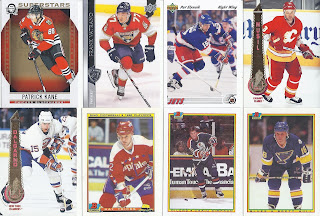 I would have gone for the Patrick Kane as the opener, as those Superstars cards were somewhat SPd in that release. We also get the olbigatory 1990 Bowman stuff. Some would be wowed by  the Brett Hull base card, but I'm more wowed by the amazing mall hair behind Craig Simpson. 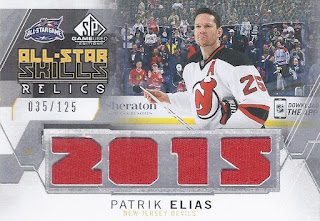 And  your hit! Pretty nice how this is dated in several places to coming from the Skills Competition, even though the he's sporting a jersey with only a couple stripes of red on it in the photo from the event. 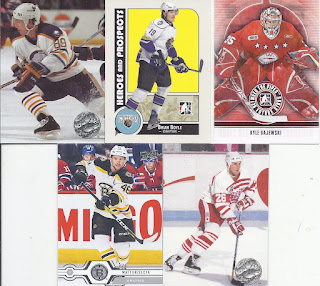 CHL and AHL uniforms are my among my favourite parts of these for the randomness factor. While Boyle did reach the NHL, and was still playing as of last  year, Gajewski never got beyond the ECHL, which ups the obscurity factor and makes for an even better card. That is Ray Sheppard sporting the throwback jersey on the Detroit card. 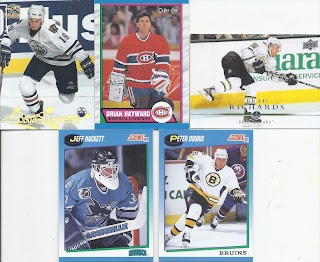 WOO-HOO! Kitchener Rangers alum Boyd Devereaux starts this off.  Also, in an interesting combination, you get a pair of goalies from the Sharks inaugural season with the very obvious Hackett, and the less  obvious Hayward. 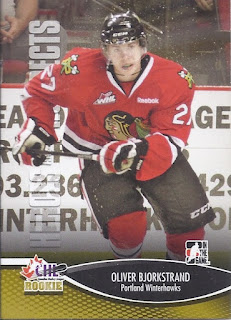 And your finale. More CHL fun with someone who did reach the NHL, and is now playing closer to Portland as he was recently traded to Seattle.
There you have it!
Posted by buckstorecards at 07:05