Some basketball from the 7/11! 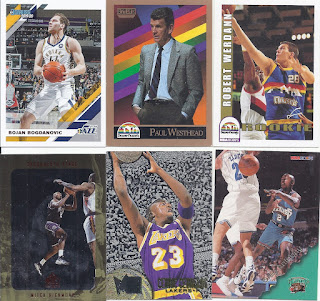 Looking behind the Grant, there's your typical repack variety. I remember the Paul Westhead era of seeing Denver Nuggets scores that seemed to test how high the scoreboards could really go. I have absolutely no memory of Robert Werdann. I definitely like SP Authentic more when the base cards were not just the generic white background you see on hockey today. And there's some Vancouver Grizzlies content! 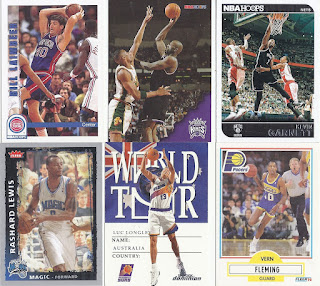 All over the place again. That World Tour subset looks like something from the early 90s, even though Longley on the Suns is an obvious tell that isn't. 1999 is the year that supplied that card. Lewis gives one of those happy coincidences where the border on the base design works perfectly with the team colours, even if silver isn't too prevalent on the actual jersey. 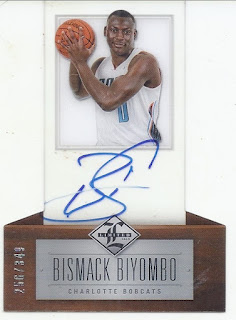 That was definitely unexpected for the hit. As usual, I just grab whichever one is at the front of the packs, so it wasn't a pack searched card. The pack seemed to lack a thicker relic card when I opened it, but I  wasn't  expecting an acetate auto. It is even from a  mid-level release, also unexpected, and he is still in the league as well. What more could you want from a repacked hit? 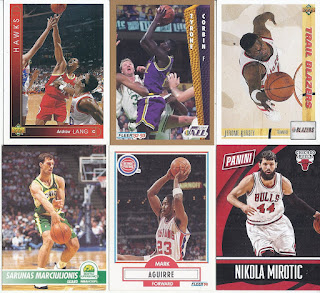 This is a little more what one would expect from a repack - a streak of early 90s cards. But even with the era being overprinted, that Kersey remains a beauty of a photograph. The Mirotic didn't look too familiar to me. But all I had to do was flip it over to learn it was from a 2015 National release. That makes this a pretty timely repack, too! 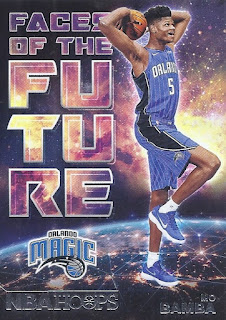 Even if Mo Bamba hasn't really become the star you'd expect from a 6th overall draft pick, his name is one of the more fun ones to say out loud. And sometimes, that's all you need for a fun card.
There you have it!

Posted by buckstorecards at 10:52