One of my favourite sets of the year, 2020 Panini Chronicles, dropped during my hiatus. I went through a good pile of it, with 4 hobby boxes and a some random group breaks coming my way. I'll recap the boxes next week, and do the randoms throughout the week. I landed the Athletics, Blue Jays, Dodgers and White Sox in those. Since some of the Dodgers content I got was already shown off last week by Greg @ Night Owl Cards, I'll start these recaps with the remainder of those cards. 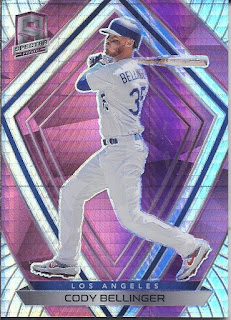 Let's open with some shininess, and a Neon Pink parallel. So bright, you almost don't notice the lack of logos. 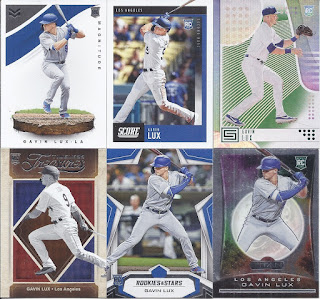 The big winner for the Dodgers in terms of volume was Gavin Lux. I'm impressed that I got 6 base cards, and none with the same image reused. 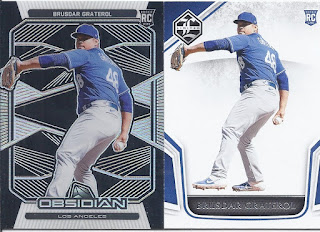 Meanwhile, poor Brusdar Graterol only gets one image across all his Dodgers cards. And Panini really loved that image, as it also appeared on his Optic card, and his Absolute card. 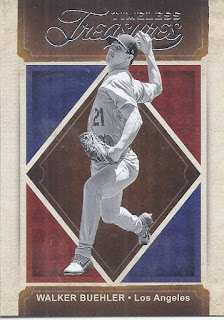 At least when it comes to the Dodgers content I got, Timeless Treasures was my favourite design for the base cards. With a name like that, the B&W photo works nicely. 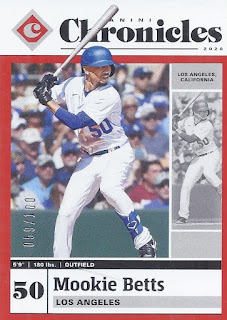 Numbered parallels? Of course there are those. And a pretty obvious photoshop job, since that is obviously Fenway in the background, and Mookie has yet to sport Dodger blue in a game there. 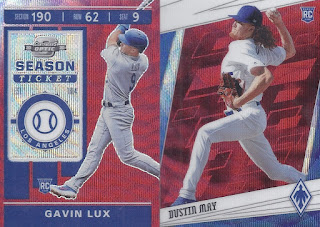 Dustin May, or specifically his hair, goes perfectly with a Ruby Wave parallel. Both of these are /199. 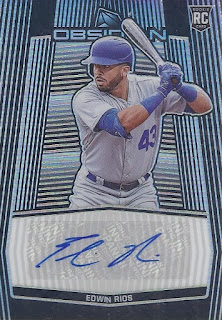 Edwin Rios was all over 2020 Panini releases, so landing one of his auto'ed cards wasn't really a surprise. 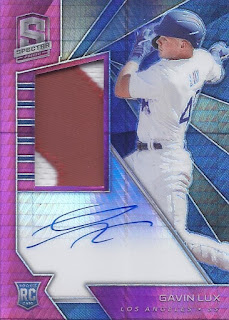 But this certainly was! If you looked at Greg's post, there was a Lux auto in there, so that means I landed two of his signatures in this, and decided to share the wealth.  Not only is this a nice on-card autograph, but it comes with a patch where the location it comes from is immediately recognizable - part of the front jersey number from their home whites. And it is a perfect way, combined with the opening Bellinger, to sandwich a post.
There you have it!
Posted by buckstorecards at 08:30