With the regular base out of the way, let's move on to the inserts/SPs. 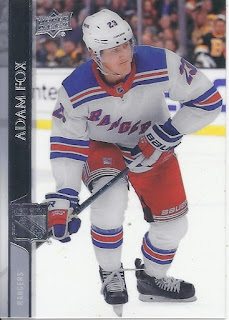 Only one paralleli across all the boxes, and this was it. It is a little hard to tell with the photo choice, but this is a clear cut, acetate parallel. These appear about 1 in every 4 boxes, so the odds on getting this over 3 seems pretty normal.
e 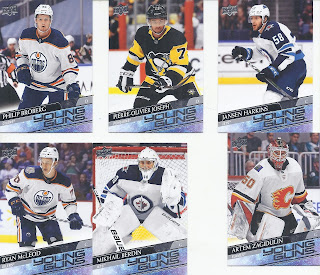 With the abrupt end to the regular season, there YG potential would have been sparse. UD received the go-ahead to use any player that was in the bubbles, regardless if they played in any game that mattered. Harkins was the only one that actually saw action last season. There are a couple of first rounders here with Broberg and Joseph, though. 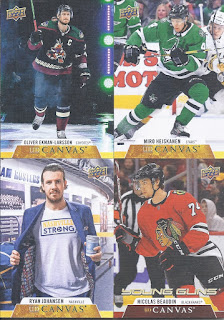 Canvas remains a familiar insert set, and they're here as well. Strangely with the collation, the YG should appear in every other box, but they were in all 3 here. 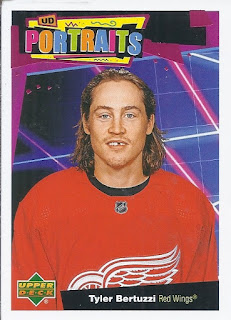 Portraits remain in the release. Perhaps if they featured more gap-toothed pictures, I'd be a bigger fan. 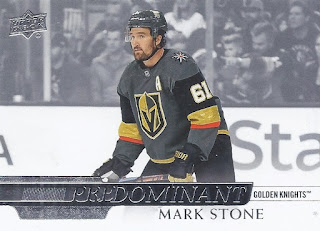 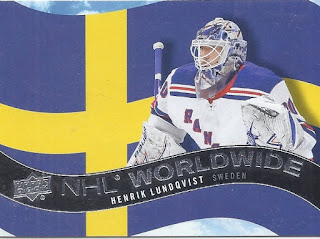 Here's a couple of new inserts for the year. Pretty basic, but it does mean that Shooting/Shining Stars have vanished for the year. 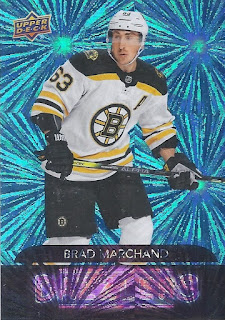 The new Dazzlers insert are one per box, and are Dazzlingly bright in hand. 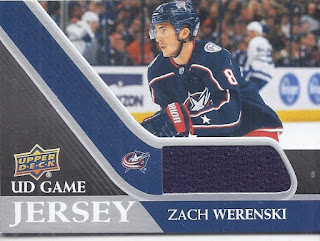 UD Game Jersey is another familiar insert. It is still fun to pull a relic, and I really do like the design this year. Like with last year's Stanley Cup design, a very appropriate window and very reminiscent of the 1982 Topps hockey stick design. 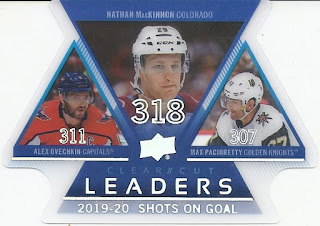 Another acetate card ends this. This oddly-cut card just tumbled out of the pack, and I was immediately curious about it, since it was new to me. These are very rare, dropping out at 1 in every 4000 packs. These are not-numbered, but in a previous appearance were limited to 25. For those wondering how rare 1:4000 is in this release, there are 24 packs in a box, and 12 in a case. So, that's about 1 in every 14 cases.
I can definitely be had for this, though.
I'll show off Box #2's goodies tomorrow.
Posted by buckstorecards at 13:30