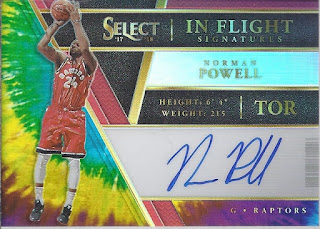 This technically is not a group break card, but I have received points in the past in these, so I can call this Norman Powell autograph a Raptors card from them. This is also my first tie-dye parallel, bringing a far-out feeling to the binder. These are /25. 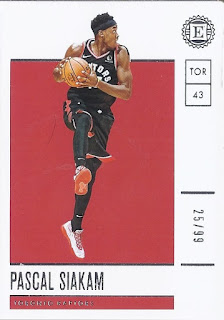 As for actual group breaks, I've been in a grand total of one during my hiatus. It was a case of 2019-20 Encased. While Terence Davis was the big chase guy for the Raptors in this, at least prior to his recent arrest, he didn't make an appearance in the case. But I did get this nice base card of Pascal. 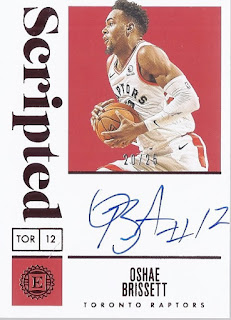 But I did get an autograph from it! Oshae Brissett didn't see a whole lot of court time last season, but like Davis, he was an undrafted free agent. Even better, he is a local kid from the Toronto area (via the Syracuse Orange), so this is a nice little bonus for the binders. I did get an autograph of his from the NCAA Contenders set, but this is my first Raptors card of his. I don't think he made any appearance as a Raptor before this, so that's also a nice little bonus.
And there you have it! Mets tomorrow!
Posted by buckstorecards at 10:00