Back to the bubblers again today, and an incoming mailer from Joe of CrazieJoe's Card Corner. He knows of my love for the artistry of the mask, and that was pretty much the subject of the mail.

I break my collection up into 2 binders. One is pre-2004-05, and the other is for afterwards. I'm going to do the same for the mailings, covering the earlier years today. There were about 60 cards that qualified for this, so I'm limiting myself to an octet of highlights. 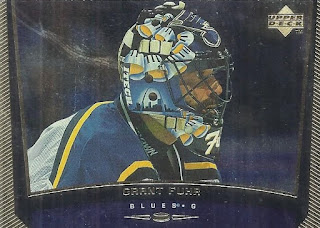 The king of this portion of the shipment was Grant Fuhr, with this close-up from Gold Reserve. He nicely combines the music theme with a cityscape in this design. 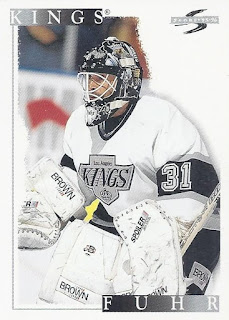 Speaking of King, I'd completely forgotten he played for them. He had a 14 game stint with them in 94/95. This was the only mainstream release he had during his career that showed that. 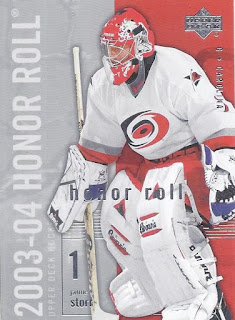 14 games was also the length of Jamie Storr's stint in Carolina at the ned of his NHL career. 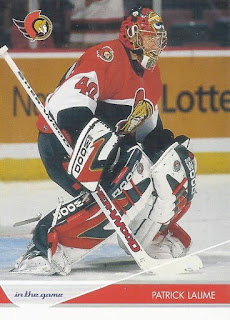 This was a dupe, but the best thing about these is that I can also add them to my Sens collection. 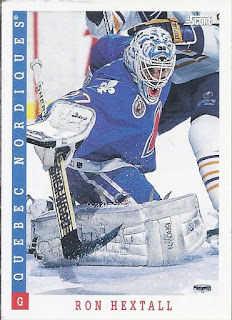 Here's another card featuring a player making a brief stop with the team, as Hextall spent one season with the Nordiques. It is nice to get one that highlights his mask design while there, since the plain white one is more common on cards. 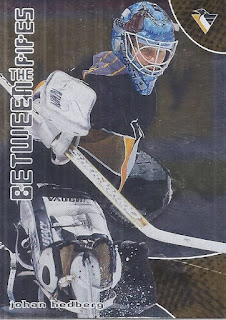 Like with Lalime and Marvin the Martian, once Johan Hedberg found a motif for his lid, he kept it. The Moose was from his time with the Manitoba Moose, and after a sudden trade he didn't have time for a new paint job. But it became his nickname and he kept it. 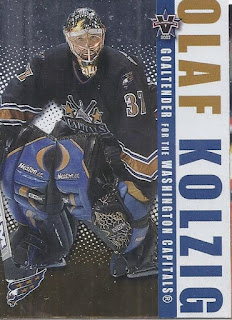 Olaf Kolzig did the same with Godzilla during his career. 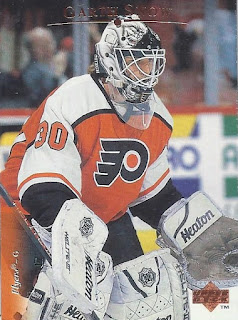 And my final one was one I was certain I had in my collection already, but repeated perusals of this binder told my otherwise. The yeti theme might be a bit overdone, but the Abominable Snowman just seems perfect for a guy named Snow.

And there you have it! Thanks for these, Joe! And thanks for the ones that will show up in my next post as well!
Posted by buckstorecards at 07:24