Not the entire team, but at least the rookies I might be chasing as the season progresses. With everybody chasing Zion cards this season, it was easy to swoop in and grab the Raptors in team select group breaks of the new Contenders release. They actually have rookies this season! With autographs and everything! Obviously, we'll have to see how things play out as training camp progresses to see if they're on the team, but it is nice to have players to hunt for as a team collector. 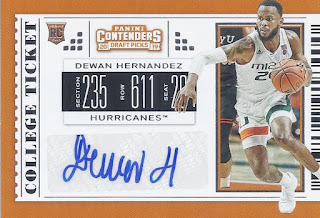 The Raptors only had one draft pick, a late second rounder. They used it to pick up Dewan Hernandez. Dewan was part of the corruption/bribery scandal in the NCAA, and missed the entire 18-19 season. But given their affinity for taking players that are projects with great potential, with various degrees of success (Siakam vs. Caboclo), he might fit in perfectly. 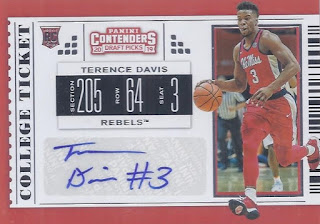 The rest of the cards were for undrafted players. I'm pretty excited for Terence Davis. He's been compared to Fred VanVleet in terms of attitude, although his philosophy is 'make 'em believe', vs VanVleet's 'bet on yourself'. 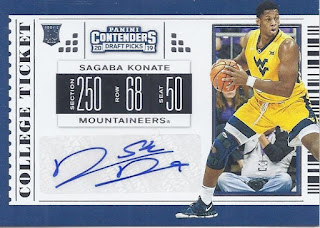 Fortunately, I landed a pair of cards of Sagaba Konate in this, meaning one of them will be bound for former blogger BobWalkThePlank. 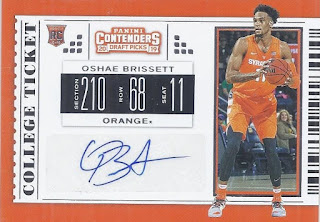 And let's end with another player I duped up on. Brissett was born in Toronto as well, so dupes of him can make their way into the Canadian NBAers mini-collection.

There you have it!
Posted by buckstorecards at 05:20