About a year ago, I remarked that Chronicles was a great way to quickly expand the Amed Rosario portion of my Mets team collection. This year, Pete Alonso is the Mets' rookie of choice. How will that part of the collection do? 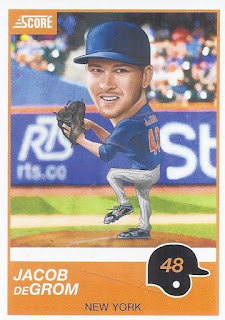 But before I get to Alonso, I'm going to show off another one of those 'big-head' Score cards. 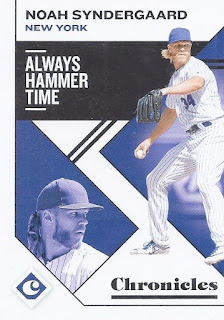 Here's one of the true base cards from the set. 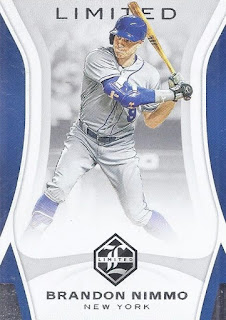 As does seem to be typical, veteran talent only appears in one or two portions of the inserts, unless one's name is Trout, Ohtani, Harper, etc. 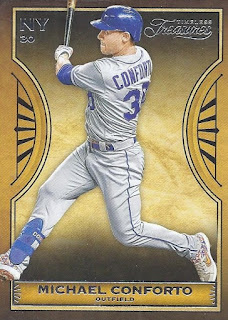 One more veteran appearance before the rookie content starts.

Here's the Jeff McNeil appearances. There's nothing different about the card in the top left and the middle right - I just hosed up the organization of the cards. The purple-tinged Obsidian is a /99 parallel.

So, after all that, how did my Pete Alonso collection do? 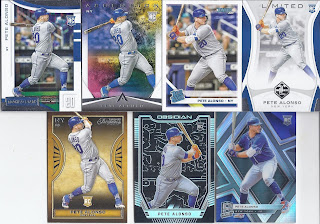 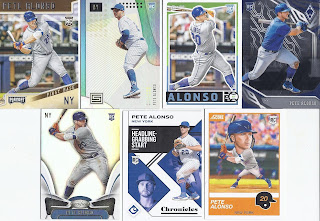 Not quite as good as last year with the cards and numbered parallels, but 14 new cards is still pretty nice. And there's another big head parallel. 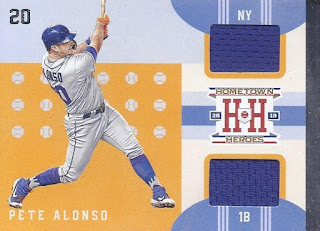 While last year got me a relic, an auto and an auto-relic of Amed, this year, I only got this dual swatch. But that's still my first hit of his, and it has to start somewhere!

And there you have it! The main event of the break goes tomorrow. Will I drown in Vlad Guerrero Jr content with the Jays portion of the random?
Posted by buckstorecards at 04:35