I had a pair of players kinda on my radar when it comes to adding autographs of them into my collection. It turns out both of them showed up as part of a lot of sticker-graph cards on ebay. As a bonus, it was based in Canada, so I wouldn't get soaked on shipping. 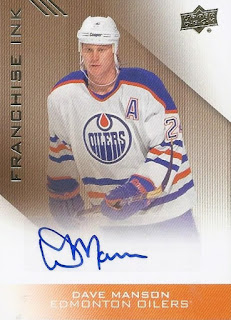 Hey! First up is one of my favourite lunatics in Dave Manson, who created almost 2800 penalty minutes worth of fun over his career. While I think of him more as a Blackhawk before thnking of him as an Oiler, I won't complain about which team the sticker is attached to when this goes into my collection. 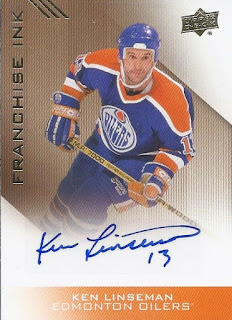 Not so much a lunatic, but a pest, but one with more than 1700 minutes worth of sin bin time over his career, here's The Rat. Again, Edmonton isn't the team I think of him as being with first, or even second, behind Philly and Boston, but he did pick up a Stanley Cup ring there. And since Ken's actually got a Stanley Cup ring from the time there,  it isn't bad that he represents Edmonton on my auto card of his.

And the 3 that I got along with the other 2. They'll probably be on their way to my COMC account sometime next week. That has become really nice to have as an excuse to purge my collection. And hey, if you want to check out some of my cards, click away!

But wait, there's more! The seller added some random base cards for protection in the package, and two of them were pretty nice. 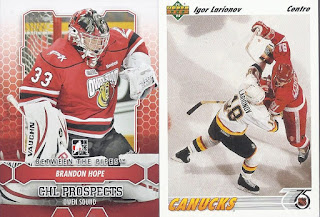 A really nice mask from the Between the Pipes, as Brandon Hope features a vicious bear to go along with the one on the Owen Sound Attack jersey, and a great photo on the Larionov card from the junk wax era that I completely forgot about.