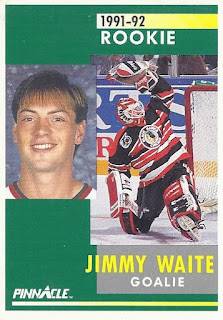 In terms of volume, this was the sparsest of the divisions. That's because there were teams that had only 1 card each. Chicago was one of those teams, but at least their one card had their truly great 75th anniversary throwback jersey on it. 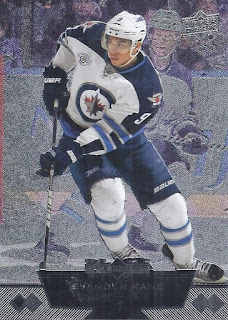 The new Jets were the other team sparsely represented, although there were cards of both the Thrashers and the old school Jets in the box, which kinda negates the lack of their cards. 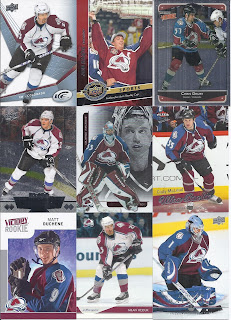 In terms of base card quality, the Avalanche may have been the winner. A double-diamond card, a nice rookie card with Duchene, a shiny 'Ultimate' Victory parallel with Drury, a great photo of a Cup lift, and best of all, the highlight was a pair of new Milan Hejduks for the 2/14 collection. Combined with the card from yesterday's flea market repack, Milan how has a one-card lead overall in 2/14 categories. 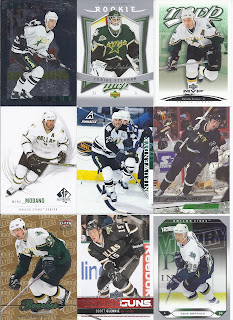 Dallas brings another Young Gun card to the mix, along with anohter shiny parallel. That Derian Hatcher is a photo from the previous season, but since this was a 1993 Ultra card, I've filed it with Dallas. Of course, Mike Modano made a few appearances with this portion, so I had to highlight at least one, opting for a card from 09-10 SP Authentic. 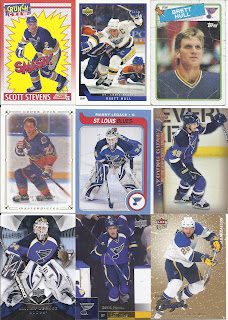 That is one battered up Brett Hull rookie card. But still, it really is one that a modern collector should add to their collection, especially since one can grab an early 90s chase card quite cheaply.Outside of that, there's a new, albeit cartoonish Scott Stevens on its way to my Kitchener Rangers alum collection, and more parallels and a Young Gun. 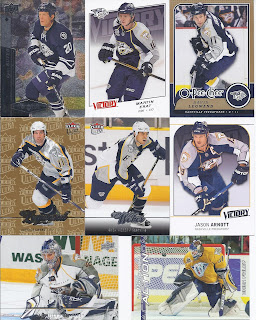 The Predators were another team that I struggled to fill the scanner glass with, but those two horizontal cards made it easier. Even if one featured the unforgettably ugly mustard jersey. 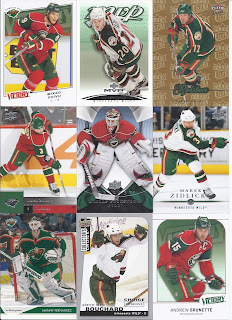 And finally, the last of the seven team division with the Wild.  Much like Nashville, not a lot of cards for them, but that Backstrom in the middle is pretty nice. The wider frame of the netminder works well with that Trilogy design (as with the Legace on the Blues). 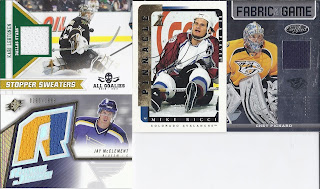 And the hits were pretty good as well. A nice, large two-colour swatch. along with a pair of mask cards, and an auto of Mike Ricci.

Only one division remains!
Posted by buckstorecards at 10:55