Group Breaking my Way to the National - Part 1

A trip to the Expo is enough for me to get my major card show vibe on, and I can do so twice a year. My only complaint about it is that 90ish percent of the content is hockey.

The big National show can solve the lack of variety problem, but jetting to the show isn't really my thing. Why waste money on transportation or accommodation that can be spent on cards?

So, I bought into a few group breaks that were taking place there. And here were some of the goodies I picked up in those, starting with the football. 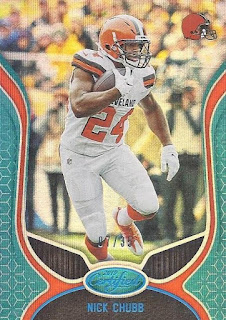 I landed the Browns in a case of Certified. While I would think that would be a nice way to add some Mack Wilson to the collection, alas, no cards of the 2/14 baby came from the case. At least this Nick Chubb is a pretty nice looking card. 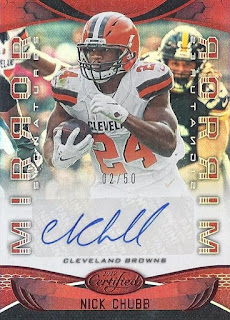 And I landed an autograph of his as well. And unless you want me to bore you with base cards, that's it for football.

But there were Silver promo packs as well, so I can least show off a couple highlights from the football portion of that as well. 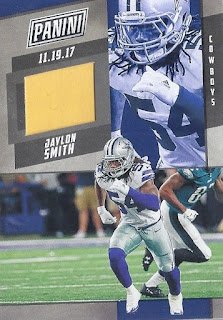 Here's a relic card, but it scanned so terribly, you can't tell what it is from that. For some reason, that bright orange pylon piece looks yellow. I'm not sure why they opted to place Smith's photo on the card, since the Eagles crushed the Cowboys 37-9 that day. Maybe the pylon was the more effective defender? 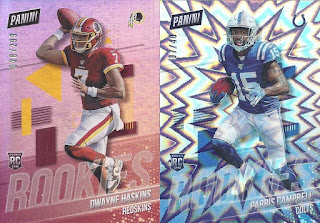 Shiny rookies! The Haskins is considered the base rookie, while the Campbell is an Explosion parallel /40. 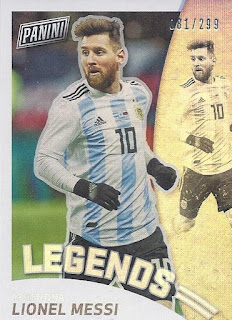 I didn't specify which type of football you'd see in this post, did I? While the Haskins is a rookie base card, this is a Legends base card. 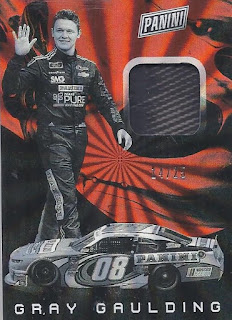 As for this? I had no idea where it should go. I didn't want to have a post all by itself, so I figure it can fatten this post. The item feels rubbery, so I'm guessing this a piece of a tire. Not exactly a big surprise as to why that car ends up on a card in a Panini promo set. And for those playing the "guess the parallel" home game, your answer is 'Rainow Spoikes'. 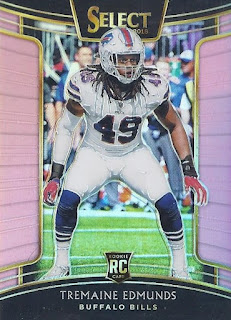 The best football card for me wasn't close, as these special Select parallels were in the packs as well. I really lucked out landing one of these /10 cards in my packs. The Bills defense looks really promising for this season and beyond, and Edmunds looks to be one of its anchors.

And there you have it! Tomorrow, I'll be California dreamin' with baseball!
Posted by buckstorecards at 06:23