Two of my favourite sets of the 10's are Panini releases, Rookie Anthology and Chronicles. They incorporate multiple set designs into the product, some as a standalone, some as updates to other sets. Baseball Chronology is mostly the first one, although there are Donruss updates this year.

I picked up several slots in a team random case break of the product. The randomizer was really, really good to me in this, as I landed the Mets and the Blue Jays, and with them the chance to chase two of the prized rookies this year. In addition, I also landed the Yankees and the Phillies/Orioles combo spot. The former will be really good for sending cards to Bo at Baseball Cards to Life. So, I scanned some of these (but not all) before packaging these up. 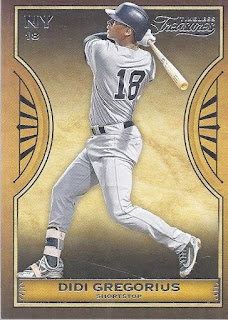 I guess I'm just going to go through these in order of amount of cards per player before getting to the hits. Didi's only appearance in the product was in the Timeless Treasures design. 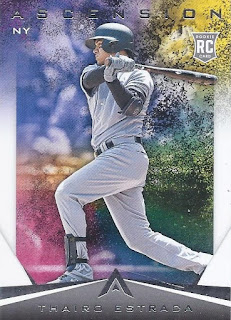 Also part of the 1-design only club for the Yankees was Thairo Estrada, seen here with an Ascension design. 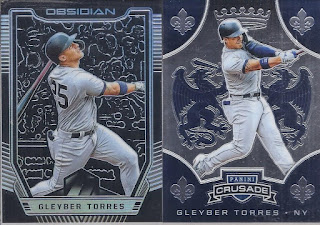 With Obsidian just making its debut as a standalone basketball product, I wouldn't mind seeing it in baseball as well.

I've been getting good variety with sets so far, as here's some Phoenix and Crusade. 4 of the 6 packs in a hobby box of Chronicles contain hits, and the other two have Crusade base/parallels. 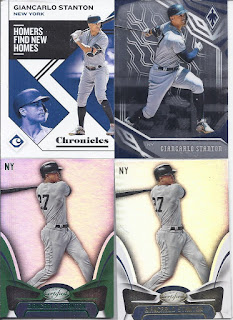 Finally, a set repeats with the second appearance of Phoenix. The upper left card is actually the base card in the set, but you still only find a few of them per box, and they're definitely not one-per-pack. Certified, seen on the bottom in both its base and green parallel format, was probably the most common of the designs, with the two parallels both appearing at about the same rate. 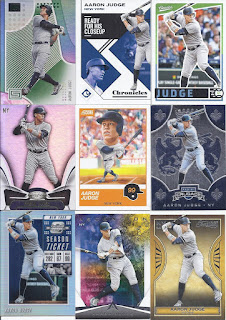 With Aaron Judge as the cover boy for the product, along with that Vladdy fellow, there should be a lot of him in the product in various designs. So, here's a bunch of them! And if you don't think that 'big head' Score design is my favourite, you're new here. 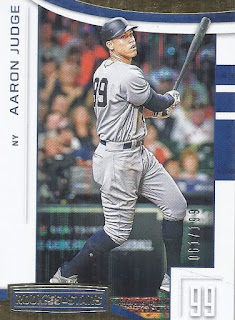 One more judge appearance as I show the only numbered parallel I landed and decided to hang on to. There will be more that get shown off when my package gets stateside, and it will hopefully be in the mail as you read this. 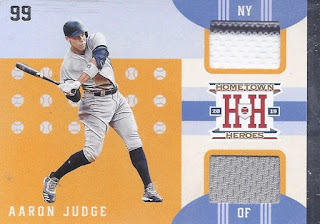 I landed a pair of Aaron Judge relics, both with this design. I kinda wish they'd kept to the original Hometown Heroes theme, and filled their inserts with players like in the 2013 release. Aaron Judge relic? Nice, but I'd rather see autos of guys like Gregg Nettles or Bucky Dent types.

This card, however, I had to keep. 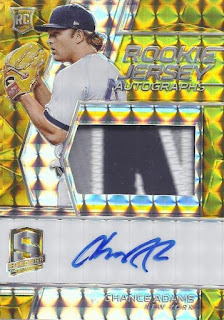 Because holy criminy is this an obnoxiously loud card. If I'm ever lost in the woods, I'd be better off using this to signal planes than a flare gun. Chance Adams is up there in terms of guys with a lot of autographs in products this year, but I love the brightness of it, and that, unlike in so many baseball releases, you can tell exactly where on the jersey the patch comes from. In this case, that's part of the 'N' from the front of a road jersey. As is usual for Panini, this is a gold /10 parallel.

There you have it! Far less imagery in the next post where I show off the Phils/Orioles spot, but have a lower-numbed hit that the Adams.
Posted by buckstorecards at 06:44