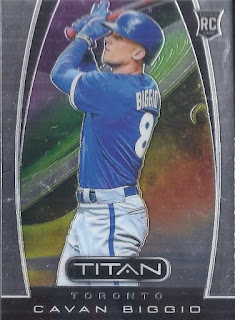 Amazingly, there were players on the Jays team checklist other than Guerrero. The second-generation love does continue with Cavan Biggio, one of the Jays three-headed monster of second generation talent. 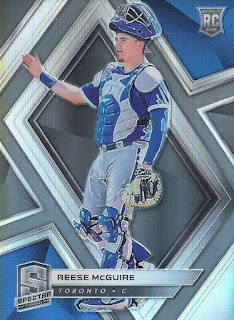 The best thing about catcher cards in Panini releases is they can use photos where you don't notice the lack of MLB logos. 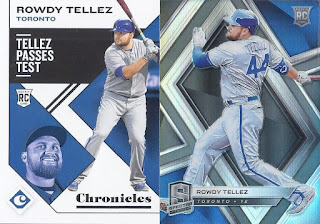 You couldn't have a 2019 release without an appearance of Rowdy Tellez RCs. 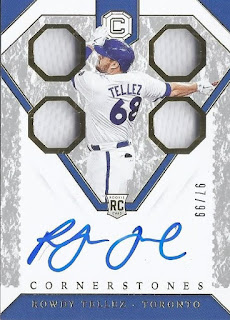 And if you would rather see some ink and some swatches with the hit, then here you are with those, all in one card. While I did prefer last year's design, with the infield-ish square in the background, the pattern still has a ballpark feel to it. 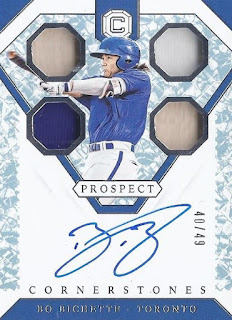 Let's keep the second generation greatness going with a second one. I seriously had no idea that Bo was even part of the set in any form, but there he is! I also love how the swing is perfectly placed between the swatches both here and with Tellez. anyhow, this is my first Bichette hit, and given that I'd already landed a pair of Vlads in a case break of Optic, I might be more excited about this one than the Vlad content in this. 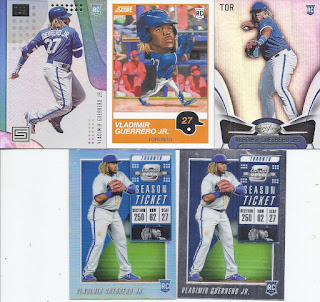 But here's what you want to see when you have the Jays in a product like 2019 Chronicles - lots of Vladdy! Big head Vladdy, in fact! 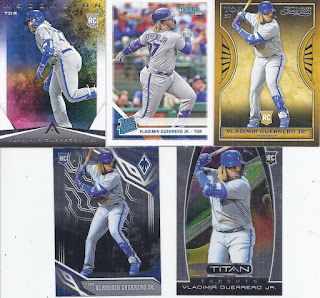 And here's some more Vlad!

If numbered cards are more your thing, here's some of those. The Red Phoenix is /199, the Hyper Phoenix is /299 and the blue Crusade is /99 as well as being a perfect parallel for the collection. 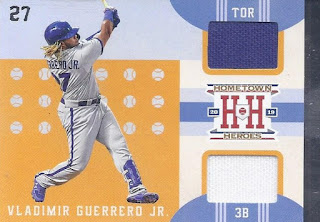 3 of 4 posts in this had a hometown heroes dual relic card. Here's Vladdy's! 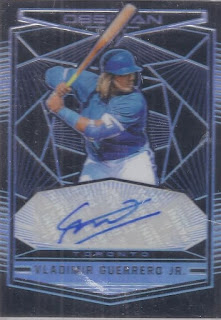 And yup, there's an autograph as well. He may have had some issues with staying on the sticker, but there's #3 for the ol' collection.

There you have it! This weekend, I'll be hitting the mailbag!
Posted by buckstorecards at 06:28