No Conundrum: These were Sens-Ational

When I busted my case of 13-14 Rookie Anthology, Matt @ Cardboard Conundrum expressed interest in a Matthew Dumba auto/relic and my Score Update dupes. I shipped those off, and here were the Senators cards in return. 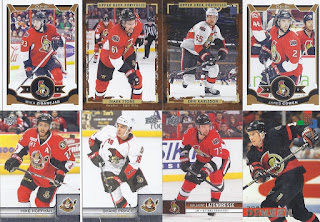 Starting off with a series of base cards. The big one here is the Latendresse, which is a base card but isn't a base card. With the labour strife in 12-13, there was no series 2, with the closest to it being a 50 card update insert set in SP Authentic. 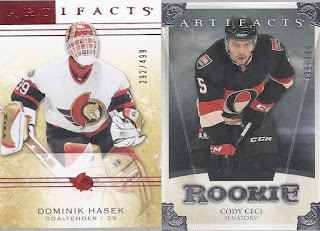 A couple numbered cards. You wouldn't think that Hasek's one season in Ottawa would warrant a card in the retired portion of the set, but there you go. 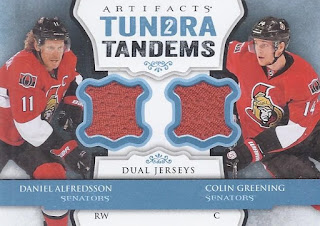 While this is a dupe in my Alfredsson binder, it isn't one in my Senators binder. That one is also a pair of white swatches, so I can complete the relic rainbow with a pair of black swatches on a third card. 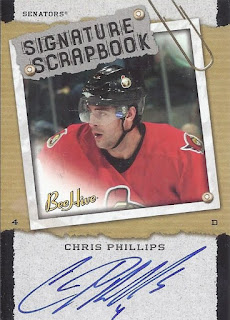 And to wrap this up, an on-card auto from someone for whom every NHL game was in a Senators uniform. I do like how the design fits the scrapbook theme as well.

And there you have another trade.
Posted by buckstorecards at 10:43