It only took me a week and a half to post the goodies from my first pack of the new stuff. Procrastination! 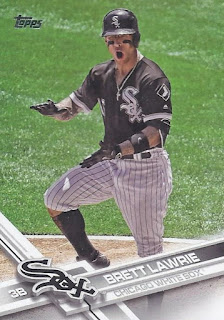 Here's my first card of 2017's baseball releases! Much like Card Buzz, the first card is Brett Lawrie. As well as the first 13 cards. Yay, collation! 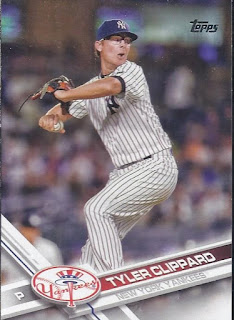 But the good thing about that collation was that I did get a new Tyler Clippard for the 2/14 collection. That's nice to get out of the way one pack into the release season. The derp face should mean that this doesn't get into my top 10 2/14 cards of the past year once Tuesday hits. 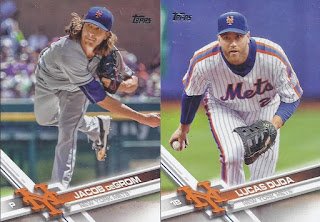 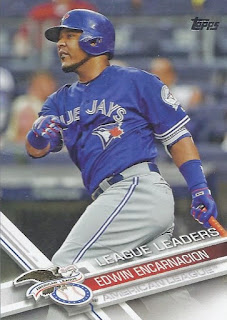 2 Mets cards, but only 1 Jays card. I can't fault them too much for having Edwin in a Jays uniform on a League Leader card. 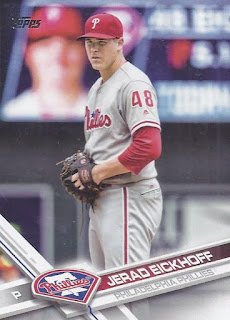 Time to highlight the interesting photos of the pack. This seems like a pretty generic card at first, until you look in the background, and see a second Jerad Eickhoff looking on from the screens. Cool, or creepy? Or both? 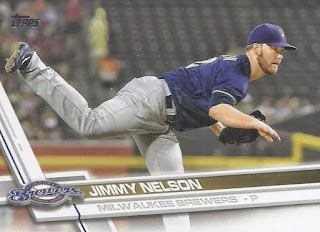 I really liked cards from last year where the player's photo worked with the design by having him on a diagonal. Here, Jimmy Nelson is almost perfectly framed where his body mimics the design. I hope the selection was intentional. 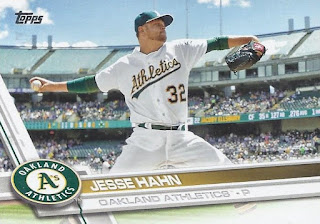 And to end the interesting photos, a nice shot where Hahn's motion is shaped alongside the stadium levels. 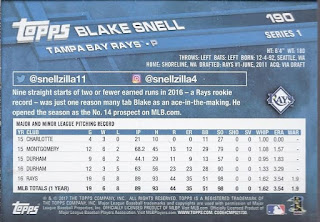 The backs are what they are this year. The colours look interesting from the back when you have a pile of cards (much like 2016 Donruss football/basketball), so I will give them thumbs up for that. I did find myself looking for interesting twitter handles among the backs. snellzilla11 wins! 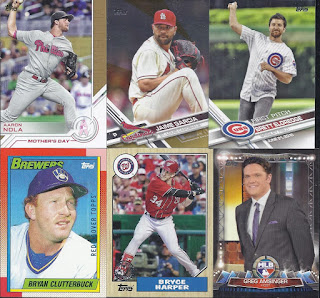 And here are the inserts. Bryan Clutterbuck looks more like my Grade 7 shop teacher than a baseball player. The MLB network card could be the most interesting card to me, if MLB network ever appeared on the TV dial up here. With that as a factor, I guess Aaron Nola is the most interesting card in this pack, since, unlike the First Pitch subject, I didn't have to google to find out who he was.

I'm not that intrigued with the flagship this year, and I think I'll wait until I see how intimidating the SP portions of Gypsy Queen or Archives are before trying a set build.
Posted by buckstorecards at 10:22