They Lived By Night

On May 6th, the Gizmoplex opens for Season 13 of MST3K, at least for those who didn't get on board with the kickstarter. Santo in the Treasure of Dracula awaits for eager viewers! Get ready to have The Perico Song earworm its way into your brain!

That means it is also the perfect time to show off my new autographs featuring the performers from MSTed movies, with both of these coming from Episode 1010 - It Lives By Night, aka The Bat People. 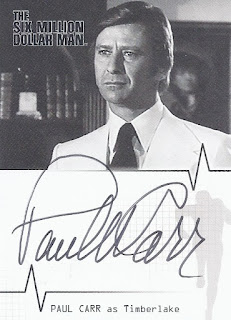 In this photo, Paul Carr probably isn't recognizable from the movie, since he's clean-shaven here. He was Dr. Kipling in the movie, or, as Kevin Murphy called him, Dr. Groovy W. Ski Bum. I like that so much better. 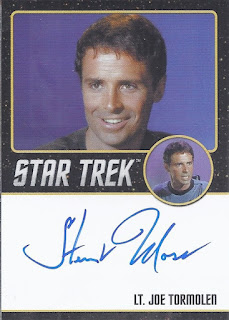 There was more than one doctor in the film as the guy who...very...very...slowly (and in a budget friendly manner) turned into a bat person was also a doctor. Bitten by a bat, he did one of the best scenery-chewing performances in a MSTed movie. Which was entertaining in an odd way, since if you don't have the make-up budget to make a bat/human hybrid, you might as well ham it up until another production has a selection of other creature costumes you can combine and create something bat-like.
Anyhow, both had nice enough signatures, and they used the space available well for the autos.
When I add the autograph of Jackey/Debbie from Manos, I've now got a binder page worth of MSTed performers. HIKEEBA!

Posted by buckstorecards at 06:00