I showed off some Raptors in a previous post - here's some Bills content from another group break that I bought into while I was overseas. Here are the results - some foily entries out of Phoenix.

And there's a complete base set of Bills. 3 rookies, 2 veterans and 1 legend. Sounds about what I'd expect out of a new NFL release with a smaller base set. As always this year, my favourite Carlos Basham cards are ones that enhance his already great last name with his nickname. I just need a 'Boogie' auto. Not a Basham auto - but one where he has signed 'Boogie'. I already have the former. 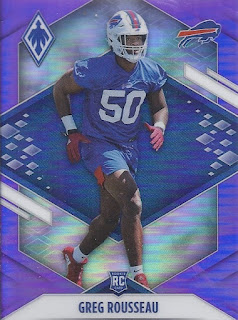 A foil set means that there will be colourful parallels within. Here's a /125 purple parallel of last year's 2021 #1 draft pick. The Bills were rather sparse in rookie content last year, but considering they drafted a few players from marquee offensive positions (RB James Cook and WR Khalil Shakir) should increase availability next year. 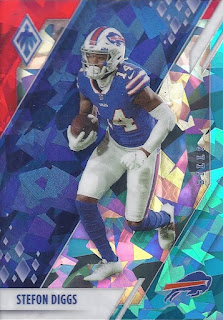 Let's go lower than /125, and here's a /50 Fire and Ice parallel.  The blue and red on the corners make it so perfect for a Bills card, to go alongside the cracked ice element. 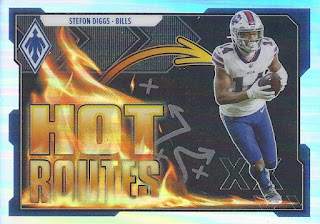 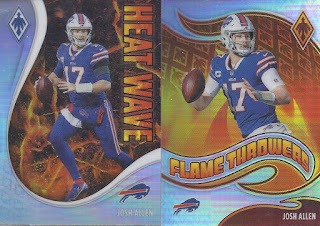 Shiny inserts! And they feature exactly the players you'd expect. 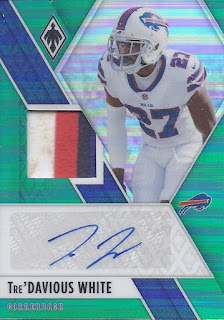 A solid hit is a great way to end a post. And this brings a lot to the table. It is the lowest numbered card in the break for the Bills, with there only being 24 more copies of this green parallel out there. That's a really solid swatch as well, with 4 colours on display. If it  wasn't evident from the slight bit of filth on the white portion of the patch, this one is also game used. That's always more interesting than a generic 'player worn' swatch.
Tre'Davious might need to work on his signature, but I'm more concerned that he's healthy for 2022.
And there you have it!
Posted by buckstorecards at 07:39