I Wanted a Revolution

Before heading away, I picked up a couple group break slots for my team(s). With the Raptors being really expensive this year, even moreso after Scottie's ROTY victory, I'm probably limiting my buy-ins to ones where there's a decent number of base cards available - if for nothing else than as a consolation prize.

Such as these - and these are nice and shiny ones. It was only a half-case of the product, but I'm still surprised I didn't get a complete set out of this - I didn't get a Siakam base card. But he'll still make an appearance. 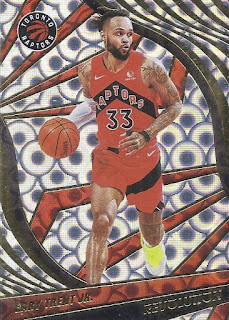 Gary Trent Jr also grooved on with this parallel. 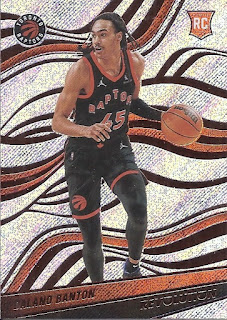 While Barnes is the big draw for for this season, I was just as excited to see this pop up. Banton was a second round pick for Toronto, and he also is part of an important piece of trivia in team history. He's the first player born in Canada to be drafted by the team. While his fellow second-rounder David Johnson made appearances in early releases, we had to wait for Banton's cardboard debut. It was worth the wait for this shiny beauty. 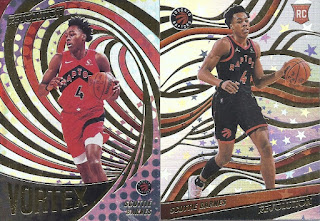 I actually didn't get a Barnes base card in this, but Scottie still made a couple appearances - one on an insert, and one on an Astral parallel. While lacking a base card is disappointing, these are still pretty nice instead. And these are rarer than a base on the whole, so it isn't all the bad.
Speaking of rare... 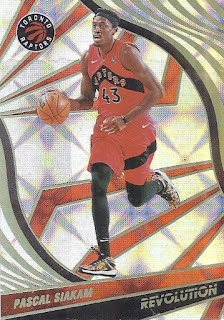 CASE HIT!
GALACTIC!
CHASE CARD!
Yes, it was definitely worth the wait for Siakam content,
There you have it!
Posted by buckstorecards at 08:23