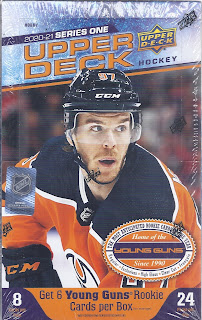 Series 1 of UD hockey dropped earlier today, and of course I had to sample a box or two of it. To start off today, here's some of the base card highlights from the product. 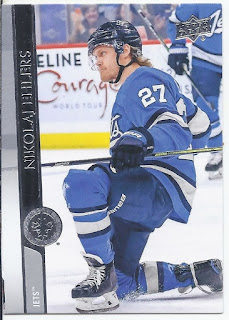 Since I always like to judge a product by the first card out, it was a pretty good one this time, with card #1 being a 2/14 guy! 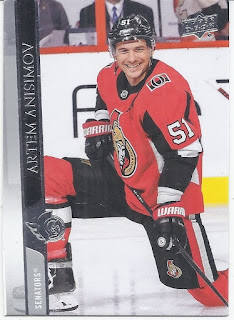 Card #2? A Sen!
Now, if you'll look closely at the cards, you'll notice how the line goes diagonally down the side of the card. That is not the intended design, as both cards were miscut. In fact, about 30  of the cards in this box were miscut.
Also, for the first time in a long time from a base-heavy UD product, there were a lot of dupes as well. About 40 there as well, meaning I only got about 100 of the regular base set of 200. Ouch. But, with that said, let's see what base cards I did get.

There were a few more Sens cards in better shape than Artem's with these 3 appearing. That's a nice, simple cardboard farewell to Bobby Ryan's time in Ottawa. 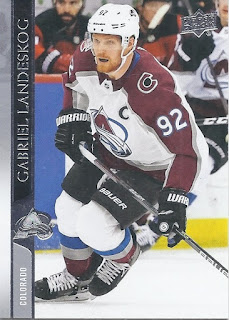 And at least one of the Kitchener Rangers alums I hot a card of was in good shape.

Some of the photos really highlighted the whip action of the sticks, with Guentzel's being so great it might have knocked the whole card off center. 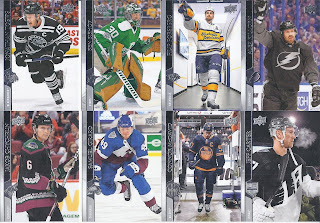 Lots of alternate jerseys as well in this. 4 Stadium Series jerseys make an appearance for Dallas, Nashville, Colorado and LA. That Avs one is something else. And by something else, I mean hideous. But the great photo on the Jeff Carter makes up for it. 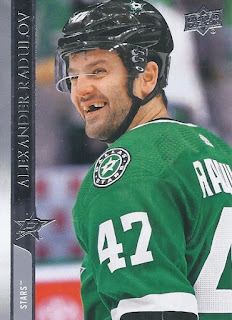 But, if I do have to pick a favourite photo from the box, I can't vote against this great toothless pic of Radulov. That's the type of photo I'd expect on a veteran's card.
And that's it. It was kinda abbreviated due to the dupes and miscuts, but I'll hopefully land the cards I didn't land because of those factors in the second box. I'll highlight those on the weekend, but tomorrow will be time to show off the parallels and inserts, including one that makes an appearance a mere once per four thousand packs.
Posted by buckstorecards at 15:53