Time to show off the final cards from my blowout gift certificate - something a little closer to my preferences - a box of 2012-13 Panini basketball. More set building fun! 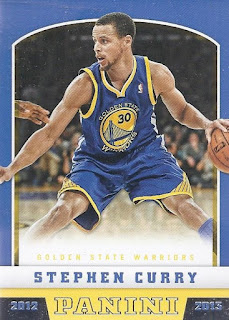 A nice colourful base design. While there really wasn't a lot of mind blowing photgraphy in this, the design offsets that, especially when the dark coloured uniforms are used and mix with the team by team base design. 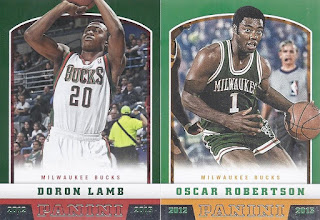 There's a small veteran portion in the base set of 25 cards. I've often said one of my favourite things that Panini does is to have the design match the era of the photo. Such as these contrasting Milwaukee Bucks cards.

Combined with a few random packs of this I'd picked up, I'm about 50 cards or so away from the base set of 300. I've got a wantlist at zistle, but given the price, I might just pick up a second box of this the next time I desire a wax busting fest. 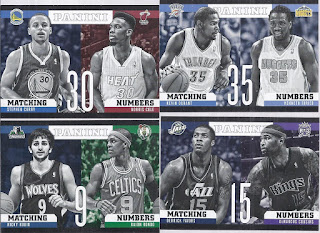 On to the inserts. This might be the one I'm the least crazy about. Maybe if it was more about historical matching numbers as opposed to current ones, I'd like this insert set more. 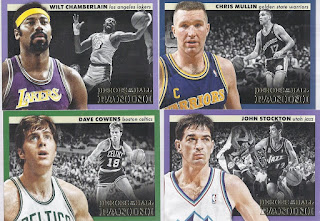 Another nod to the past with the Hall Heroes insert set. I've pulled Lenny Wilkens and Bob Pettit earlier from this one, and sure enough, the classic Cleveland Cavaliers and St. Louis Hawks logos adorn this. 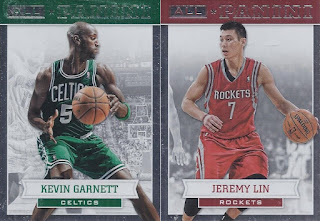 A 100 card subset indicates that getting named to an All-Panini team isn't that much of an honour. Even if the legends portion is 10 percent of it. 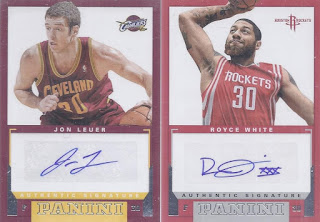 The 2 promised autos were not that amazing. At least Leuer is still in the league. I guess the Royce White auto is interesting as a sad case of mental illness keeping him out of the game. In that case, it is probably a better addition to my collection than some random bench guy. 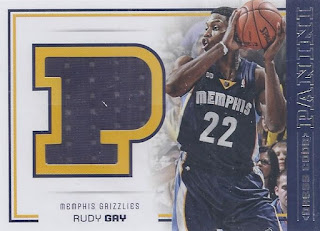 Although the box says nothing about there being relics in the box, I did get a nice sized one of a future Raptor.

In terms of book value, the worst of the boxes, but also the cheapest of them, so I really don't care. Plus, I didn't buy this to sell the cards - it was for set building. Thus making any autos or relics pleasant bonuses.
Posted by buckstorecards at 11:48