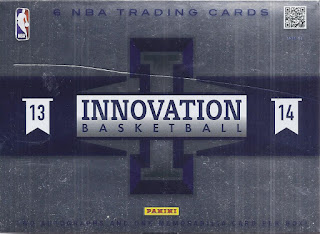 I'm more of a set builder type, so it is quite rare that I'll pick up more of a hit-based product. But, since it was store credit, and the regret from that is probably less than if I paid cash for it, I'll give one of them a shot. I was debating between this and 12-13 Limited at about the same price point. I opted for this since the cards seem to have a more unique look from this set.

It is a strange one though, as there is no base set for Innovation. Just subsets. And what do my 6 cards look like? 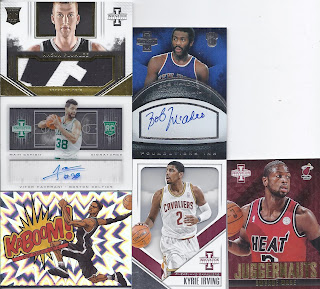 There was supposed to be a stained glass card in each box. I didn't get that, but got that really loud Kaboom! card instead. Those fall at a rate of 1 per case, so that's actually a really nice card to get. These are actually a rare card in the sense that they scan louder than they are. The Nets continued with the /25 nameplate patch of Mason Plumlee. I'll probably send those two, along with the Eck autograph, to my COMC seller account next week. But the others are keepers.

The Kyrie Irving has an acetate portion in the upper half, and is /199. No numbering on the Juggernauts card of Wade, but it is still a nice one. He might have only played one season in Boston, but I'm still very happy to welcome that card of Vitor to that collection. And for me, the big pull was the McAdoo autograph. A beautifully legible signature of a Hall of Famer, and limited to only 10 copies. My only complaint, and it is minor, is that I wish it were a Buffalo Braves picture as opposed to a Knicks one. Just for my defunct teams mini-collection. But if that's my only complaint, it is a sweet card.

I'll be busy getting my Mets and Blue Jays fix over the next few days, so the final box will likely be posted Sunday or Monday. Auto-post it is until then.
Posted by buckstorecards at 07:44