Baseball Goodies from Too Many Manninghams

Time to recap yet another trade envelope from Too Many Mannighams. It was a nice mix of all 4 sports I collect, and it does have such a mix that I can split it over several posts hitting all the sports. First up will be some of the baseball portion of this, save for a trio of cards that will be perfect for a Canada Day posting. 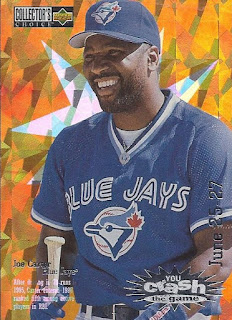 Time to start shiny with a new addition to the Joe Carter collection. I wasn't collecting too intensely at this time, and assumed this card was some sort of parallel from the Crash the Game series. Nope. This card that would be an SSP Orange Cracked Ice today is the base of the Joe Carter, with the only parallels being the games to crash. I'm not sure if that's a good thing or bad thing. 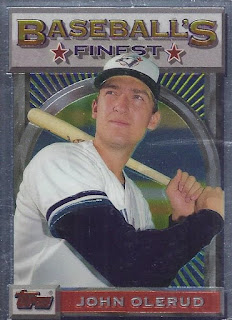 It might not be a super shiny refractor, but this is my first 1993 Finest card. 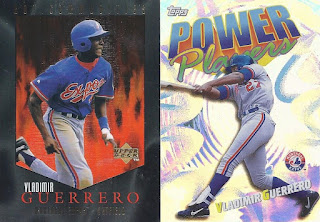 Back to the shiny with these contrasting Vlads for that collection. As nice and reserved the Hot Commodities card is, the Power Players is as loud as it appears.

Up next, a trio of Mets cards, and they're also  all over the place. Acetate. Autographs. Shiny. The Mejia is /150. 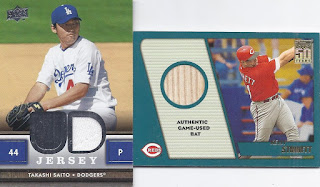 Time for the relics! It gets to be somewhat of a challenge to add new relics to the baseball portion of the 2/14 collection. But these fit. Kelly Stinnett is starting to become a doubtful addition though. While his earlier cards do list his birthday as 2-14 (along with baseball-reference), while Wikipedia and some of his later cards, such as his great 2006 UD card, list it as 2-4. But, I'll still consider it a 2-14 card if the card either doesn't list his birthdate or has it as 2-14. 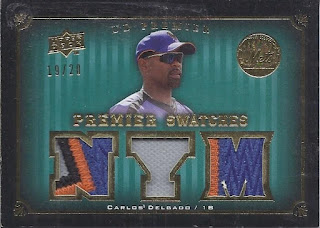 And here's the big baseball winner. This is easily my best patch in the Carlos Delgado collection. At least in terms of colours. A four colour patch, a two colour swatch in the middle (there's a thread or two of orange hiding under the left side of the die-cut Y and another two colour patch to wrap it up. It is #d to 20, and is my lowest numbered Delgado card.

And that's just a third of the package or so. More over t he next few days.
Posted by buckstorecards at 12:59