I keep trying to work my way through my Listia credits, but still have about 14K left. Eventually, they'll be at zero, or close enough for buying purposes.

But, the meantime, I'll add some cards to my various PCs. 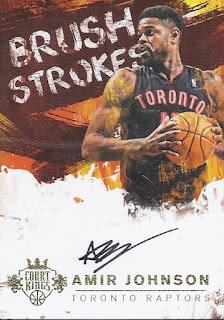 This is my favourite out of the bunch, an on-card autograph of Amir Johnson. It comes from Court Kings, a set I love for its Dick Perez-ish garish backgrounds that give me a flashback to the Diamond Kings of the 80s. I don't know if Amir will be a Raptor come the beginning of the 2015-16 season, but this will still have a welcome home in my Raptors binder. And that's all that matters. 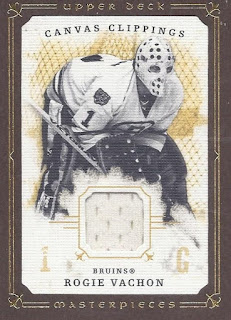 There are two Rogie Vachon relic cards in this set. One features his famous double crowns Los Angeles Kings. The other is this one. I'd be disappointed, but this one has him on the Bruins, so I can add this to my collection of them, which is nice considering there are not a lot of cards out there with him on the Bruins. There is no indication of which jersey in particular this swatch from, but I'll just pretend that it is a Bruins uni. At least the swatch matches the photo. 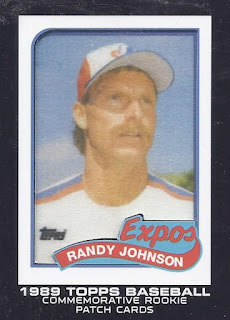 And finally, a manu patch for my Expos collection. Interestingly, the swirl portion of the card with the names on it as die-cut cardboard, even though those portions still appear on the patch.

And there you have it. 3 different types of hits. It is like I opened a Jumbo Box of Series 2.
Posted by buckstorecards at 16:08