I mentioned picking up a repack box that included 5 packs, and a complete 1990-91 Bowman set. It did feature the interesting Brett Hull card  that I posted earlier. While nothing in this set is noteworthy for value, I did pick it up since pretty much every dollar store repack I've ever bought has had at least one of them. The photography is mind-blowingly dull. Lots of cards of guys skating around during warm-ups, or sitting around on the bench. Surely, for a photography fan like myself, there has to be at least 10 interesting photos in a set. 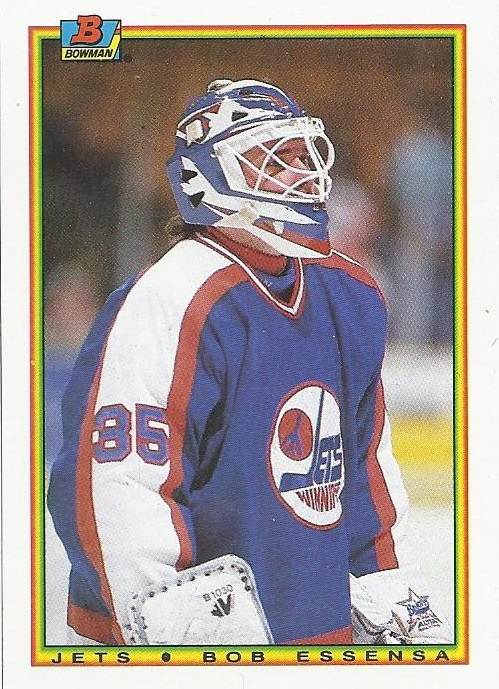 #10. Bob Essensa. #131. I think my love for the masks will come through in these picks. 4 of my top 10 are netminders cards, although only 2 of them are purely mask cards. If I came across a second one (Don't send me one!), I'd have no qualms adding it to the mask binder. 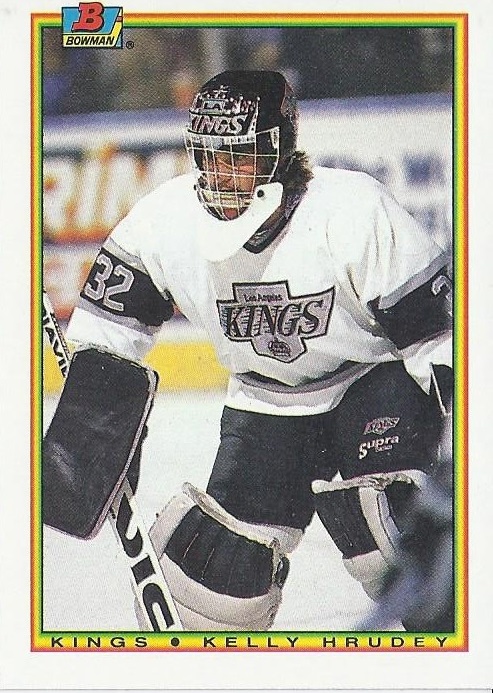 #9. Kelly Hrudey. #144. The other purely mask card in my top 10. A hint of going beyond just the team colours on it, with a hint of the Hollywood mask that was to come. 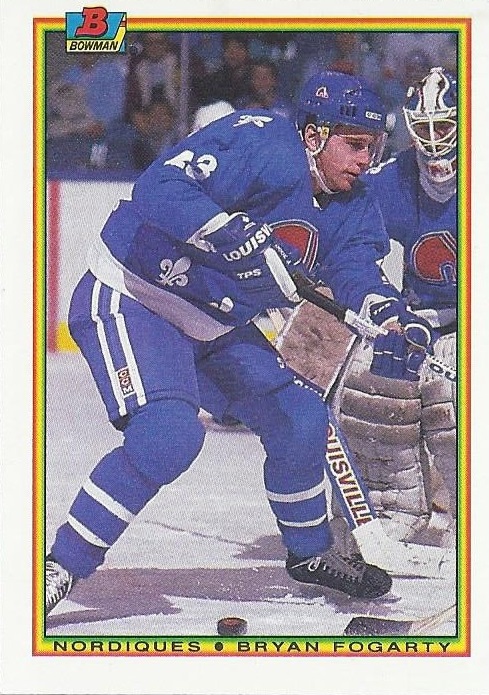 #8. Bryan Fogarty. #173. I was convinced, after watching him just dominate in the OHL with the Thunder, that he'd put up good numbers in the NHL. Sadly, his demons got the better of him, and he passed away at only 32 years old. As for the card, it's an interesting scramble by the net photo, with the puck nicely framed at the bottom. 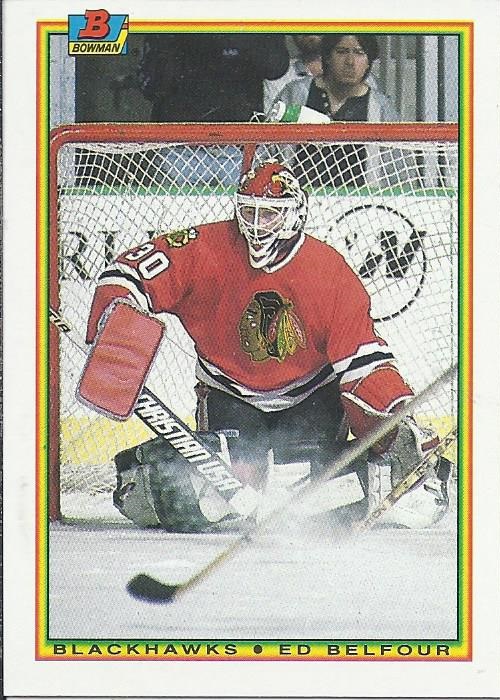 #7. Ed Belfour. #7. A nice action shot with the snow flying and Ed guarding the five hole. Probably one of the better cards from the set. And if you have $80 floating around, you can pick up a graded one at COMC. 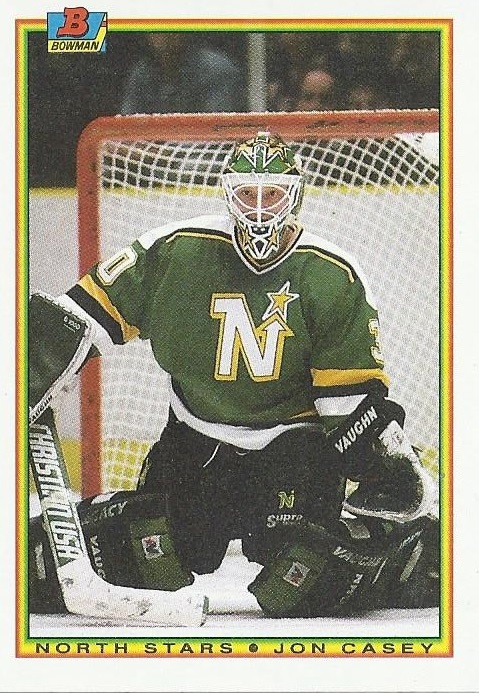 #6. Jon Casey. #183. The action's better in the Belfour, but I give this one the nod for Casey's intimidating stare. 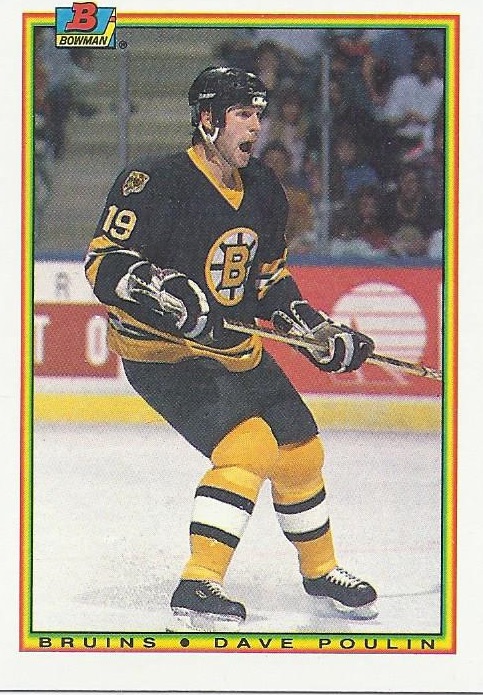 #5. Dave Poulin. #36. Yawning? Or yelling at his teammates? Given the nature of this set, I'm wagering on the former. 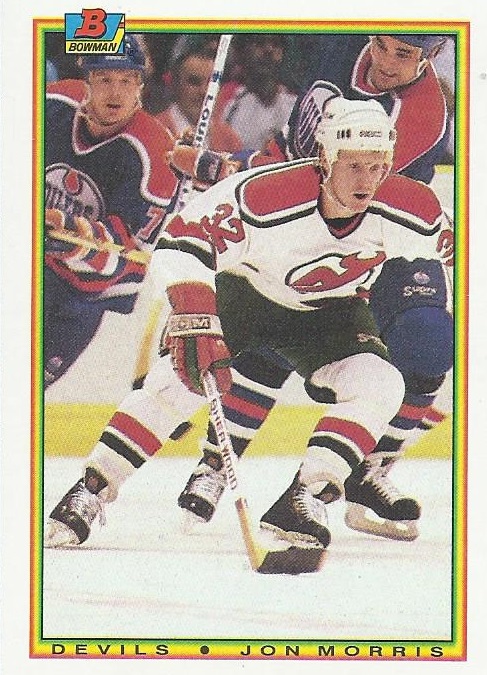 #4. Jon Morris. #84. Just a generic action shot. But considering the dullness of this set, this card of Jon Morris skating with the puck and the chase being on is enough to make this #4 in my list of cards in this set. Depressing, no? 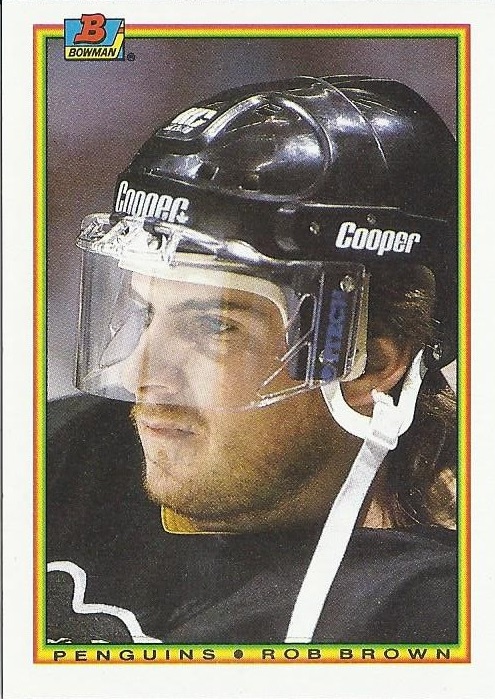 #3. Rob Brown. #202. Who says a simple card of someone just sitting there has to suck? Brown's expression makes this card interesting. Just looking on with a mix of scorn for the opposition and a casual "It's OK. We've got this one in the bag." 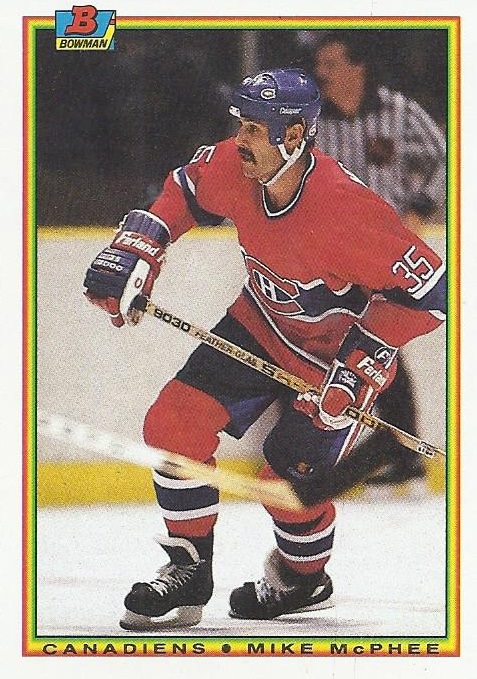 #2. Mike McPhee. #43. I just love the framing on this one. Especially the stick being held by the anonymous player between the camera and McPhee. Intentionally unique or just incompetence with the set? Probably incompetnece. 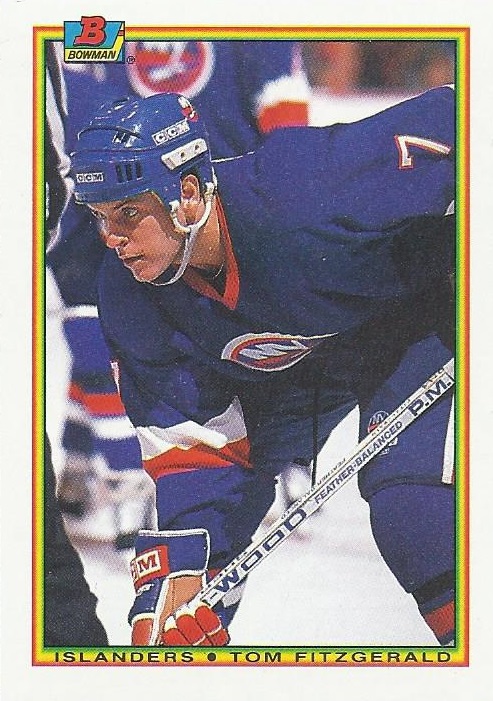 #1. Tom Fitzgerald. #116. Holy crap. I love this card. Just an intense face-off shot, with Fitzgerald staring a hole through through his opponent. Just a hidden gem in a set, and on a card devoted to a purely common player. If I'd seen a photo like this on a set like Upper Deck, it wouldn't look at all out of place. Beautiful.

I guess I was able to find 10 interesting photos in this set. It was definitely harder that you'd think.
Posted by buckstorecards at 14:16

Email ThisBlogThis!Share to TwitterShare to FacebookShare to Pinterest
Labels: hockey