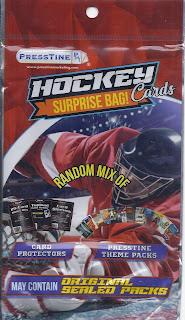 There's never a bad time to order a bunch of repacks and have them sent your way. These Surprise bags are different from the Dollarama ones in more than appearance. They have 5 items inside, and there tend to me more items in each. 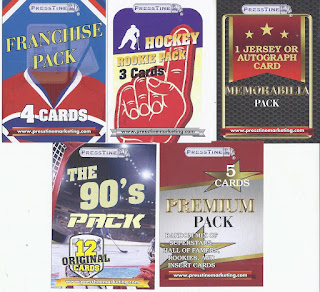 These were the contents. I'll go through these clockwise from the upper left. 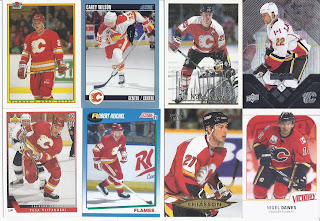 There was an error on the label. I have no idea if this was intentional or not, but I did get this octet of Flames. Surprisingly for repacks, that was the only 1990 Bowman in the repack. The Dawes is a Victory Update insert from 2009 Series 2.

Your rookies from that pack. The Dollarama rookie packs contain 4 cards, but only 1 rookie in each. Here, the easy winner is the Parkhurst of former tough guy Darren Langdon. Check out his minor league penalty totals! Almost 550 minutes in 92-93 between the ECHL and AHL.

The memorabilia card was that of a future Senator, so that's a nice consolation for there being none in the repack as a whole. 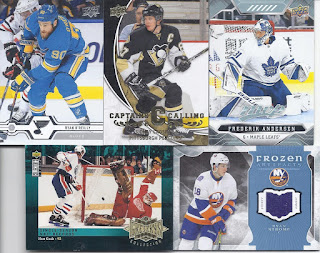 That's a nice mix in the Premium pack, with a second hit appearing. I'm not sure that Andersen is a Superstar quite yet, but O'Reilly's cup win got him there. Can't complain about any appearance of Crosby or Gretzky. 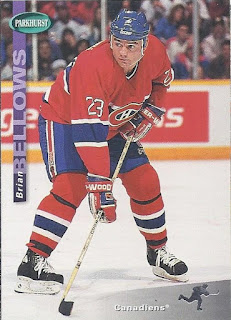 A Kitchener Rangers alum starts off the 90's pack. 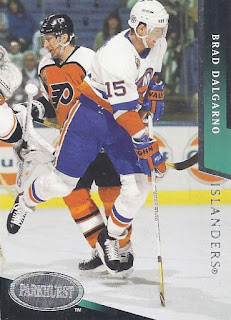 Brad Dalgarno taking to the air is my favourite photo in the bunch. 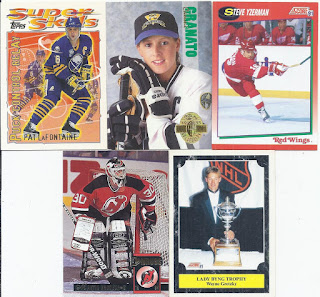 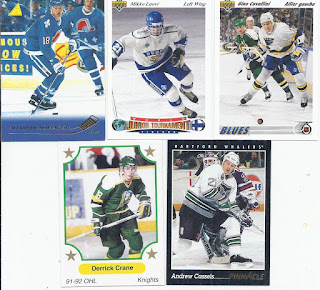 And the rest of 'em! 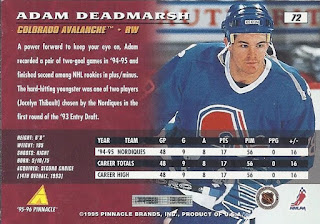 But you do still have an interesting card, with this being one of the first Colorado Avalanche cards. They may not have the logo with this design, but they do have the team colours down.

There you have it! Basketball will be next.
Posted by buckstorecards at 07:31