Two posts in just over a week with Raptors content? I've got to recap some group break cards at some point. 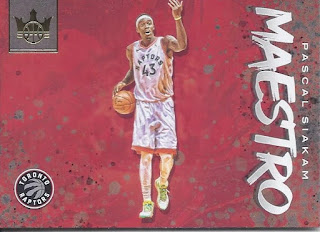 Some breaks don't go as well as hoped. But the Raptors didn't have too many cards in Court Kings, so I shouldn't be surprised by the fact I got only this one card. 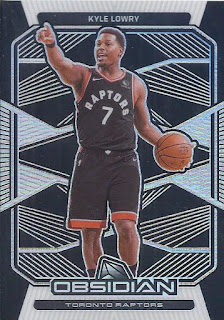 Then there was Obsidian. A little more high end the Court Kings, but there seemed to be more possibilities here. Unlike with Court Kings, at least I got a base card here. It might also be the first product I want an empty box of, since the cover shows Ja sporting a Grizzlies throwback. 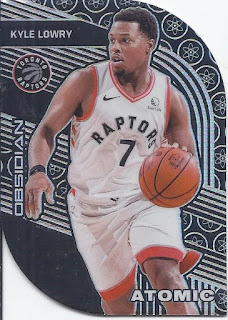 With it being a higher end set, and Terence Davis making only sporadic appearances as the rookie content, you've got to be content with veteran content in these release. Here's my first numbered card in the group, a /99 insert of Lowry. 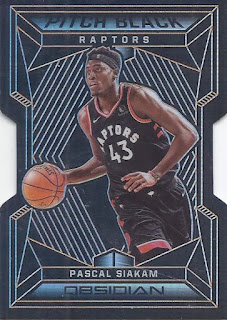 There's only a hint of it in the design, but this is an Orange Etch parallel of the Pitch Black inserts. The orange is a lot more evident in hand than in scan. This particular parallel is /35. 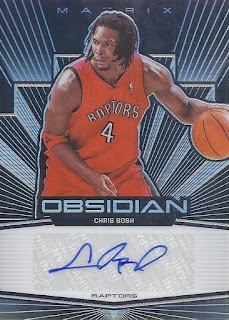 There's some nice low-numbered cards there, but how do you make a break of a higher-end product even better? Throw in an autograph as well. The Raptors had a pair of autographs in the product - one of Siakam and one of Bosh. While Pascal's stuff is hot right now, I've got plenty of his autographs from his rookie season. This is only my second one of Bosh though, and my first one of his after his time in Toronto ended. He'll probably be the first person inducted to the HOF who spent significant time with the club so I'm very happy with this.

And there you have it!
Posted by buckstorecards at 13:35