I guess the logical post(s) to return with are cards from packs I busted from before I went away. I could have done these via autopost, but I guess I really don't value your time. 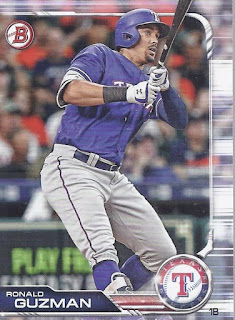 Bowman had pretty much priced itself out of my desired range immediately, leaving retail as the only option. I assume they're pretty similar in terms of configuration between veterans and prospects, just with hits being harder pulls. Photography is pretty generic, so here's my favourite pic, with Ronald Guzman looking like he might wipe out after the swing. 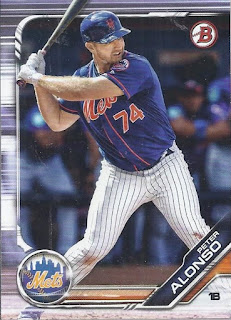 There were only 5 paper prospect cards among the packs, so I lucked out with one being a Met that is showing some a lot of promise early on in his MLB career. This was the only Mets or Jays content in the packs. 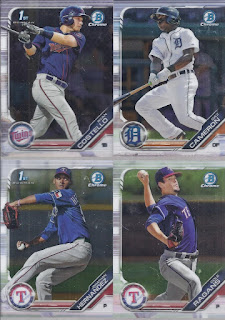 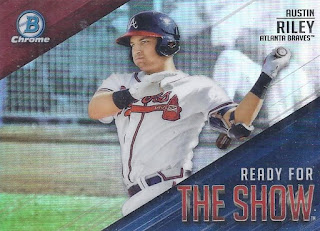 This insert proclaims that Austin Riley is ready for the show, and since he's already made his MLB debut, I guess it was right. 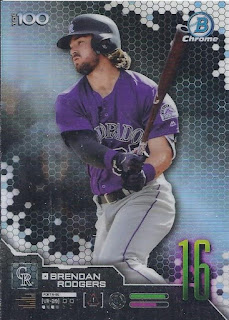 And another insert out of the Scouts Top 100 set. Unsurprisingly, it was Vlad Jr that lead the way in this set with the #1 spot. 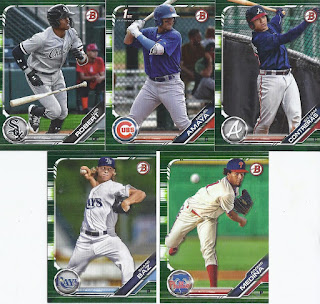 You do get a 5 pack of green camo parallels in the retail packs, so at least there's that.

But, yeah. There's some Bowman. That I probably should have just left on the shelves at Wally World. Maybe some LCS packs tomorrow of Big League and Diamond Kings will be better. Or at least more interesting.
Posted by buckstorecards at 08:47