While I've already shown off some Score cards so far, here's a whole bunch from a purchase of the Bills in a team-select break. 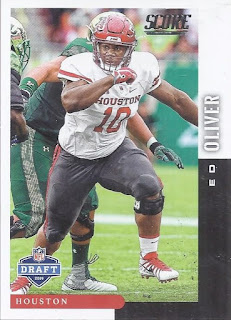 The Bills were not especially prevalent in the insert portion of the set, but there were a couple. I'd already shown off a Josh Allen from when I did a box break. It wasn't just 1989 Score that got a salute in this year's release, but also 1998 in this draft-themed insert set. 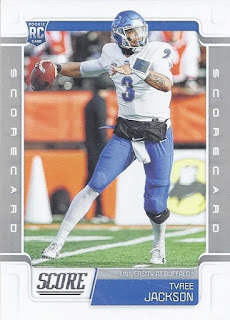 Here's one of the Scoreboard parallels. Tyree Jackson won't have to look to far for a place to stay, as he's moving to the Bills as an undrafted free agent from the University of Buffalo. 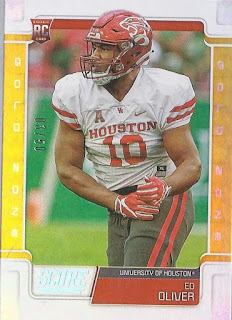 It looks like I'll be busy super-collecting Ed Oliver this season, as he also had a base card, and henceforth lots of numbered parallels. 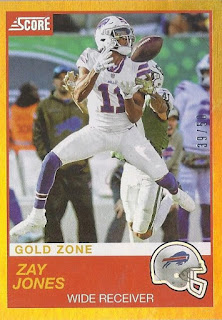 While the gold zone really aren't that spectacular for the rookies, they do look really nice here on the regular parallels. They combine nicely with one of the many great photographs of this set. 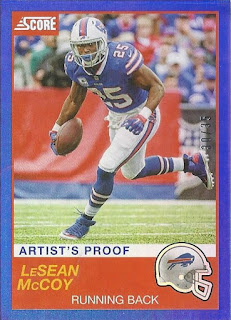 McCoy didn't get one of the top photos in this set, but the blue parallel does go nicely with the uniform. 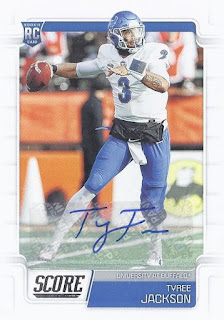 The Bills had 4 rookie autographs among the draft portion of the set, and I managed to land all 4 of them in this break. WOO-HOO! Here's one of the players you've seen already. 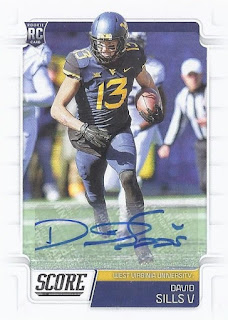 The other undrafted player with a card in this on their way to One Bills Drive was David Sills V. Best of all with him is that any extras can easily be sent on to Walk the Plank. 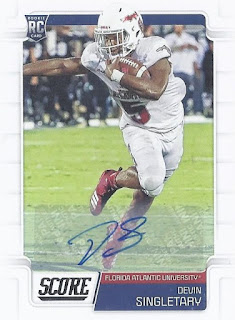 Moving up to players picked by the Bills during the draft, here's Devin Singletary. He should be making plenty of appearances in sets this year, as he was also the Bills only invitee to the Rookie Premiere this past weekend. Bring on the player-worn swatches! 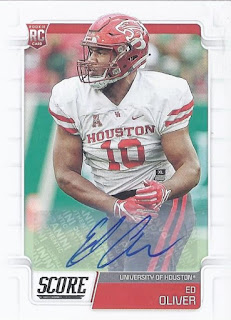 Finally, here's some more Ed Oliver! If I get an insert and parallel, I might as well add an autograph as well. That is variety I can approve of!

There you have it!
Posted by buckstorecards at 02:52