With the season just days away, it is a perfect time to highlight some new Bills cards in the binders, whether they originated from COMC or from some group breaks. 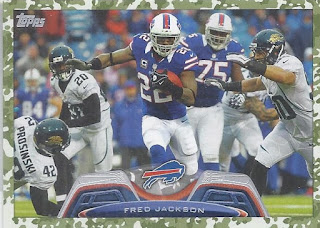 I'll start with the COMC stuff and a nice, inexpensive parallel of the face of the franchise through the late 00s and early 10s. They were ghastly throughout that period, but at least when Fred Jackson touched the ball you could picture something exciting happening. 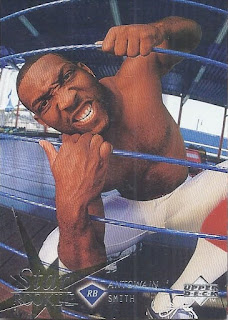 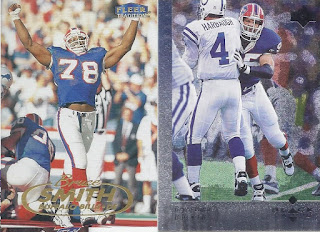 I was at both these games. Might as well get a couple cards to commemorate the occasions.

Switching to group breaks, here's the veteran base team set out of Elite.

I didn't get any of the rookie base cards from the Elite break, but I was luckier when it came to inserts, with these three playing card themed inserts. I sorta hoped that these would be a buildable deck of playing cards, like O-Pee-Chee does with hockey. Alas, they were dashed when I realized that there were no 11 of Bulldogs cards in a real deck. Or a 27 of Bills. 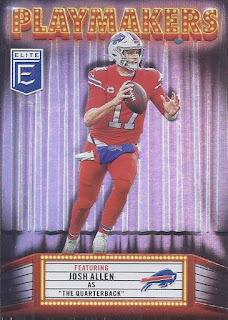 One more insert from Elite. 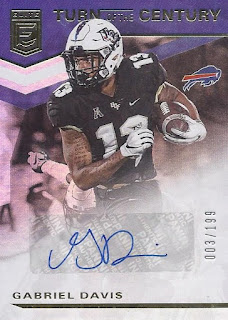 The first auto of this post is from Elite. It is initials only, but at least there is a bit of style to the G, and both letters are legible, which probably places it in the upper half in terms of sig. quality from the 2020 rookie class. 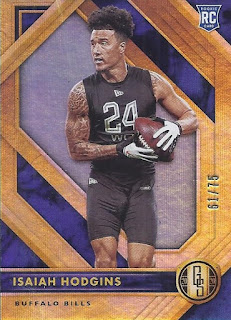 Here's as high-end as this post gets - some cards out of Gold Standard. Hodgins was a 6th rounder in the draft, but he's on the roster for the season. 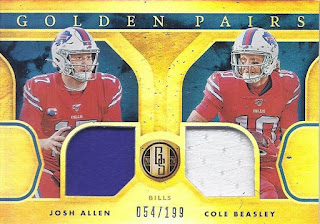 Here's a pair of swatches, neither of which match the uniforms the players are pictured in.

And now Panini is breaking down by player whether or not the swatches are from an actual game. 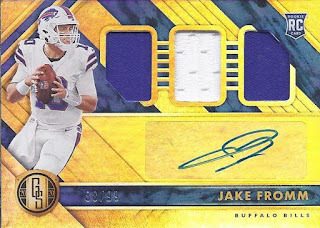 No need to specify that these swatches were not game worn. But here's my first auto of rookie QB and elite white person Jake Fromm. He's on the main roster as well, behind Josh Allen and Matt Barkley. But with COVID-19 lurking, I wouldn't be surprised to see him on the field at some point.
And there you have it!
Posted by buckstorecards at 08:14