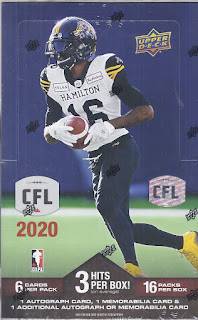 There is not going to be a 2020 CFL season. But why would that stop me from busting some CFL product? Especially with Tiger-Cats content in the form of Brandon Banks on the cover? 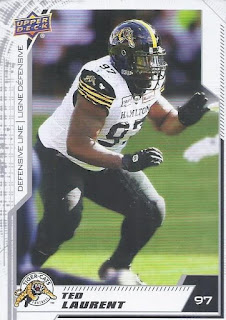 Here's the base design. Very similar to last year's look. 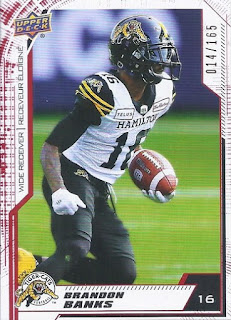 With purple parallels /15 not being a thing in this year's release, that means the red parallels are bumped up from /150 to /165, meaning pretty much a similar print run with there being a numbered card or hit per pack. 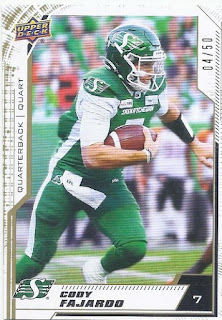 Golds are still there, and still numbered /50. 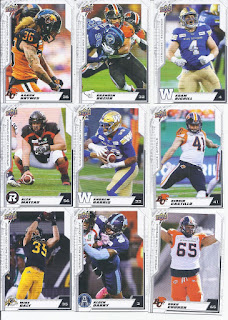 As can be expected, there's also interesting photography among the base cards. These were some of my favourites from Box #1. 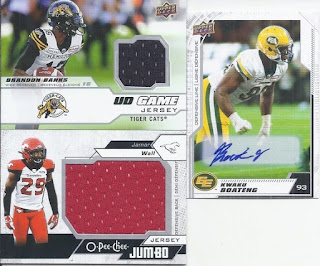 Probably the least interesting group of hits from the three boxes, but that's still a really nice Brandon Banks swatch for my Ti-Cats PC. A sampling of base cards from #2. If you look in the lower right corner, you'll see something pretty rare. A card for a long snapper. I'm not sure if this is the first time someone has been listed with that position on their card, but it has to be single digits 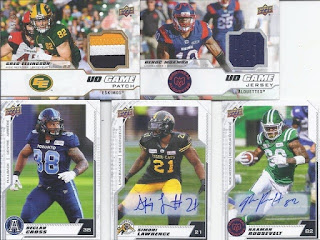 Box 2 definitely brought the most hits. The Declan Cross is a blank back parallel. They aren't numbered, but since the /15 purples last year were one per box, and this was the only one I found over 3 boxes, I'm going to estimate the print run of these at 10, give or take. Pulling an auto of a Ti-Cat will always be nice, even with Simoni as a Group E, the most common.
I'm not going to highlight the base cards from Box 3, since with 4 exceptions, they were exactly the same as Box 2. I'm guessing the 4 were the ones that didn't get put in the pack that contained the Edmonton patch. 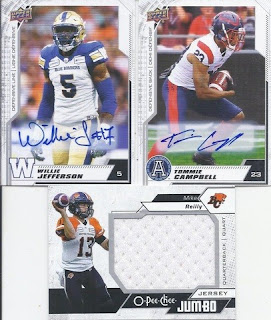 That Willie Jefferson is actually a pretty tough pull. The reigning Most Outstanding Defensive Player is a Group A hit, falling 1:506 packs. I really do like the Willie J sig as well. A nice big swatch also helps take the edge of a box that didn't provide too much in terms of set builders.
There you have it!
Posted by buckstorecards at 03:30