I'm writing this almost a week in advance, with the Raptors having just forced Game 7 against Boston. So any comments that are shown to be incorrect on the 15th have an explanation.

Here's another 20+1 hit hanger. The football one was really good. How will this compare? 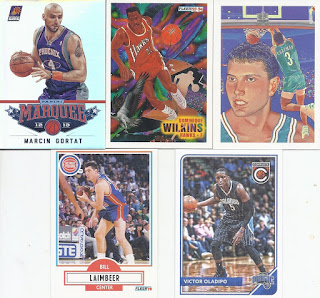 Right behind it is a slightly thick base card out of Marquee. It faked me out that the hit would be immediate. There's a couple drawn cards after that. I'll give the Wilkins the nod since it does show a reel behing the Human Highlight Reel. 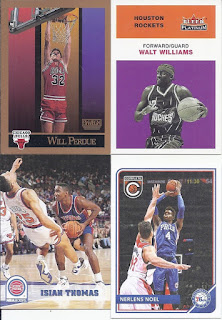 I don't care how many times I see that card, I still wonder what Thomas did to Doc Rivers to get him to do that. The vertical background perfectly matches Perdue's motion, making for a nice parallel look. Throw in a retro look for a fun addition of a Raptors alum. 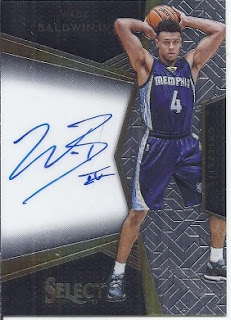 And here's the hit. On-card autograph? Nice. It is initials only, but the IV is a nice addition. Baldwin was first rounder, but never really caught on in Memphis or later in Portland, and has been in Europe the past while. 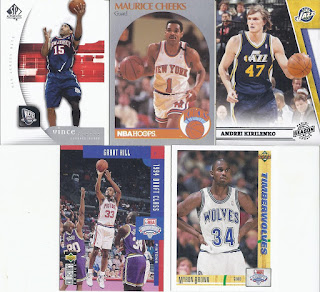 A Grant Hill rookie card and an appearance from Vince Carter? This is a pretty good repack. 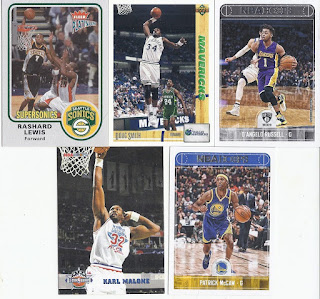 Platinum looks strange release, as the name would imply that it was a higher end, shiny set, like other Platinum-named sets but the actual cards in this repack, the Lewis and the Williams, would have more of a retro feel. But they're still nice. Patrick McCaw was starting the middle portion of his 3 seasons, 3 rings when this Hoops card dropped.
And that's it! I think I like the football one more due to the variety of the cards, since this one had 4 dupe sets.
There you have it!
Posted by buckstorecards at 02:00