I'm still working my way through the "From the source" repacks that I picked up a couple months ago. With the NFL starting up, and most teams with their first game in the book, here's a repack that does promise me a hit to go along with the 20 cards. 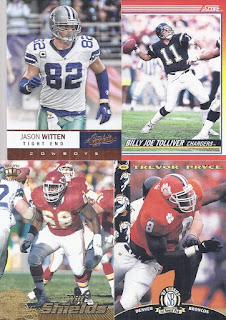 Here were the cards right behind the Rivers. Will Shields might be the best name ever for an Offensive Lineman. It was like they knew from minute one that is what he'd do when he grew up. Will spent his entire pro career in Kansas City, and has been inducted in the Hall of Fame. 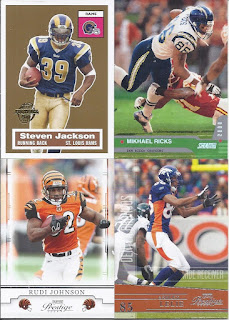 A Heritage-ish issue highlights the next 4 cards. Not the most flattering photo for Ricks though as he's being tripped up. Great Prestige design on the Johnson, with him busting through on one part of the border. That Lelie though. Busy, and unreadable silver on brown. 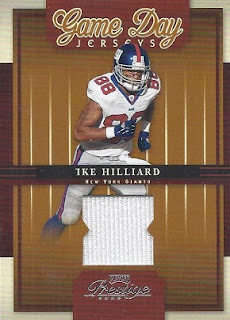 Considering I was expecting a photoshoot worn swatch as the relic, it was nice to get one that was supposedly game-worn by someone with several seasons worth of experience at this point. 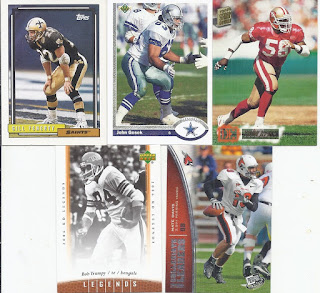 As I often say when it appears on a card - I miss dirt infields on football cards. The Fenerty also has a nice bonus: 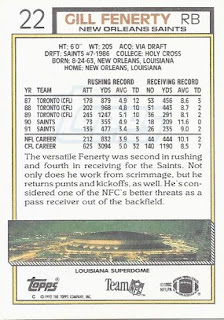 CFL stats on the back! 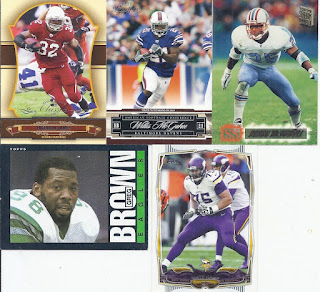 Much like with the Claude Lemieux posted in the hockey repack, it really seems odd with James in the Arizona colours, despite playing 3 seasons there. The McGahee has him listed with the Ravens, but I'll still call this a Bills card. The 1985 black border design, mixed with the team colours for the team name, has aged wonderfully. 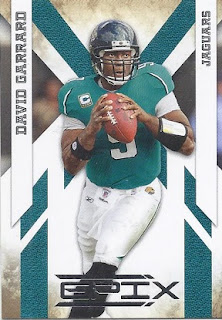 And what a wonderful card to end the post with. Not only a 2/14 card, but a 2/14 card I didn't have! Card #87 of David for that collection.
That was a really good repack. Even the junk wax cards, which were at a minimum, came through with something interesting. A 2/14, an interesting hit, and some interesting photos make me wish I'd maybe ordered a few more of these. Maybe next time.
Posted by buckstorecards at 03:00