aka: What can I get with an Upper Deck expired redemption?

Before I start the card show-off portion of the post, folks in these zip codes should watch their mailboxes.

A couple days ago, a really unexpected package showed up. The label indicated it came from Upper Deck, but I didn't recall having any sort of active redemptions with them. Maybe this letter will fill me in. 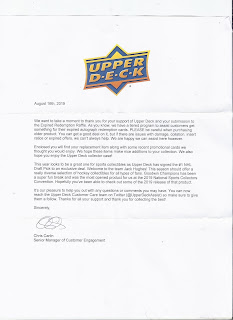 Oh yes, that's what this is for. 10 months back, I busted a box of 14-15 UD Premier. While I did land myself a beautiful RPA of the guy who would go on to win this past season's Vezina trophy in Andrei Vasilevskiy, there was also an expired redemption in it of Evgeni Malkin.

With the Expo about a month in the future, I added my information to the card and submitted it there. And promptly forgot about it until this package arrived. It was a bubbler, with a small plastic case inside of it. The case isn't your usual clear plastic holder, but an UD branded one. It is hard to describe, but you can see one of them in this video. 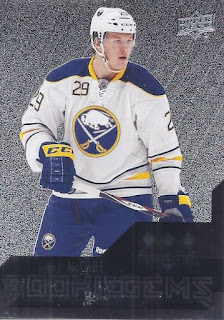 We started with 5 base cards from 14-15 Black Diamond. 4 regular base cards, and this triple Diamond SP of Jake McCabe. 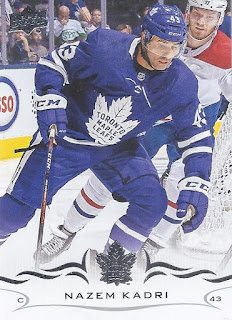 There were also a dozen base cards from the past Series 2. I've shown these plenty of times before, so here's the only PC card of the 12 with the Kitchener Rangers alum in Nazem Kadri. 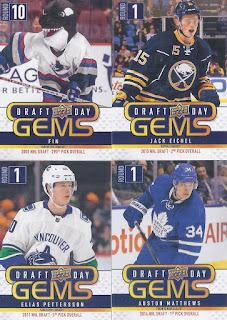 Now, we get interesting. I'm guessing the next bunch of cards were mostly promo cards from various events. The Draft Day Gems keeps the design of the former insert set from 09-10, but loses the spirit of it. While those saluted late round draft picks that became stars, this just salutes stars. But at least there's a mascot card in there, and it makes me think this might have been from a Vancouver event. 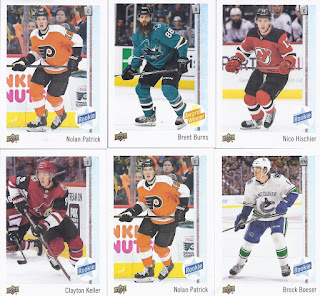 These 6 cards are from something called "17-18 Collector Care", which just makes me think these are bonus cards that they include when they're sending out redemptions that take a little longer than they should. 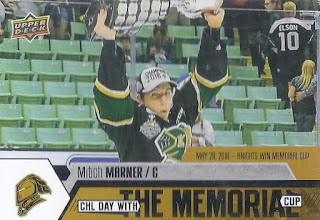 These I remember from the bonus packs at the same Expo I turned in the redemption at. In fact, I know I pulled one of them, and I think it was the Mitch Marner. Which I sent off to COMC since it had two strikes against it, being a card with both connections to the rivals of my two favourite hockey teams. 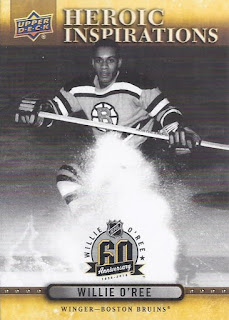 I think this was also a bonus pack card from that Expo. But far more interesting to me than the Marner. Willie O'Ree was the man that broke hockey's colour barrier, and he was finally inducted into the Hall of Fame this past November. 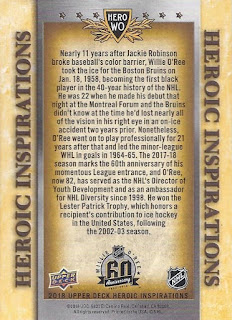 The biography on the back is worth showing off as well. 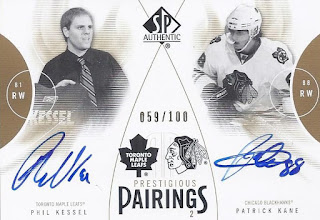 And the big boy to replace the Malkin. A prestigious pairings card unites a pair of players with the initials PK with a pair of on card autographs. This card is from 2009-10 SPA, and is a year before another rather well-known player with PK in his name made his debut. That's a pretty nice replacement for a Malkin, even though my favourite card in the whole mix is probably still the O'Ree.

There you have it!
Posted by buckstorecards at 04:56