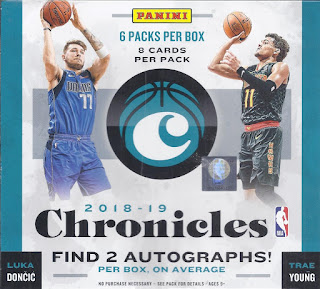 I can't bust Rookie Anthology and find current rookies, so I might as well use this as my substitute for a multiple-design fix. There's 6 packs per box, perfect for a pair of posts. The packs seem to contain 6 unnumbered base cards, with 4 or 5 being rookies spread over varied designs, and then 2 numbered cards or 1 numbered card and an auto.

Let's see what this box has! And as for the cover boys, that's all you will see of them, as there wasn't either a Luka or a Trae. 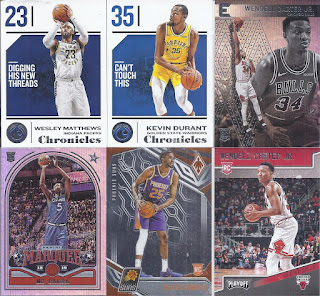 While I didn't get Luka or Trae, this does set the tone for a box that will have multiple appearances of Wendell Carter Jr and the awesomely-named Mo Bamba. That's Mikal Bridges' name disappearing into the background of the Phoenix design. 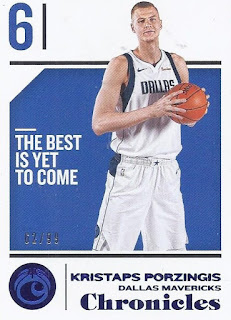 Not the most exciting card for the first parallel, but at least it goes nicely with the team colours, and since he did a photoshoot for the Mavs, it also isn't a photoshop job. 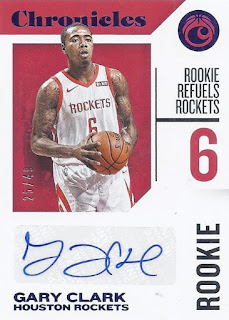 The final card is my first of the autos. He was an undrafted rookie this past season, but still got into 50 games for the Rockets. Not the best one to start, but I'm sure some people who pulled autos of the undrafted Fred VanVleet thought something similar a few years back. 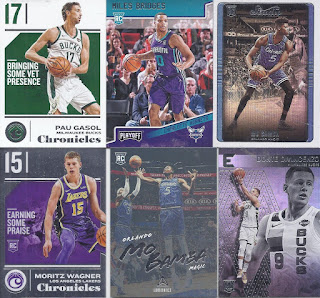 Not the most variety here - with a pair of Bucks and a pair of Bambas. But at least that Wagner will find a good home after my next mailer to Ann Arbor. Charlotte's colours look really nice on the Bridges. 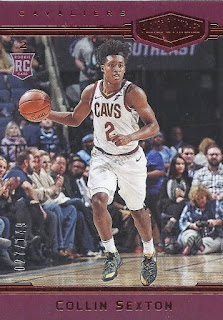 A red parallel with a Plates & Patches theme, if not an actual plate or patch, is the first of the parallels in the pack. Sexton is another player that seemed to come up a lot in this box. 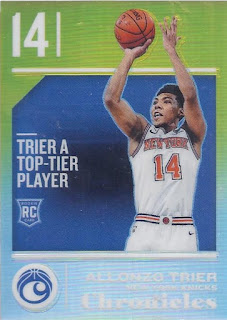 This might scan green, but this is a gold parallel, and being Panini that means this is /10. Coming off landing a Gala /8 card in a group break, I'm a bit of a magnet for low-numbered Allonzo Trier cards in this. And I am fine with that. 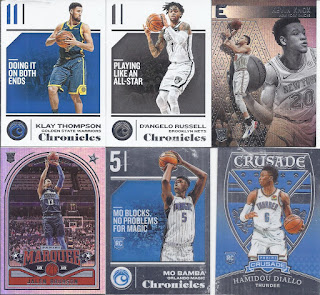 That Brunson is about as close as I'll get to a Mavericks rookie card in this. There's the 4th appearance of Bamba in this, with one more to come in the second half. All in all, lots of silver and blue in this grouping. 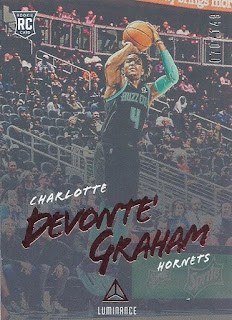 The red foil looks really nice on the darkened Luminance background. If there were Raptors cards available with this design, I could totally see myself foolishly chasing the rainbow. 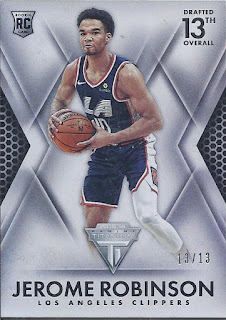 The final pack has the second of the really rare pulls from the box, with a Titanium of Jerome Robinson. This card is numbered to #13, his draft position, and, despite the low numbering, is considered a base card. There are also parallels numbered to the draft year (/18), and the jersey #. As a bonus, you get the great Clippers 1984 Olympics-inspired jerseys.

And there you have it! 3 more packs, with another autograph in the next post!
Posted by buckstorecards at 14:18