Since I didn't really have enough Bills in my COMC to-be-posted folder for a significant post, I decided to wait until a group break envelope, containing the blindingly loud cards from 2019 unparalleled and combine them for a single post. 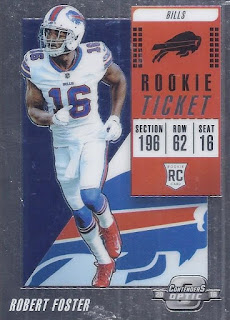 Robert Foster was an undrafted free agent in the 2018 season, and impressed enough to see a lot of playing time last year, as well as to be a part of base sets in 2019. Here, we return to 2018, with a nice card from last year's Contenders Optic. Work a team logo into the background, and I'll generally like the design. 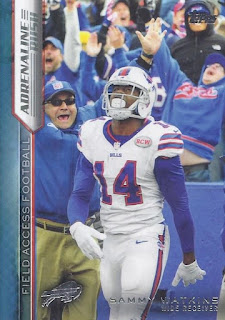 I just liked the contrast of the calm nature of Watkins while everybody behind him is celebrating. 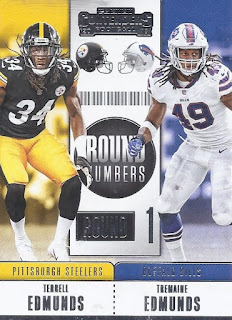 If a pair of siblings is selected in the first round of the draft, it really seems logical to put them together on a card. Although since Tremaine was drafted ahead of Terrell, maybe they should have swapped places on the card. 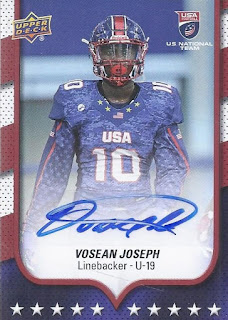 While 5th-rounder Vosean Joseph has received some NCAA cards, it does appear that he has yet to have a card in Bills gear available. So, I just went for the cheapest option to add one of his autos to the Bills binder. 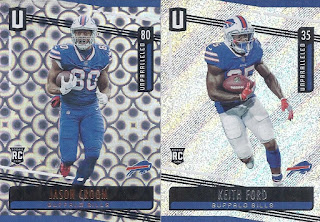 One of my favourite things about Unparalleled is that their sets tend to throw in a couple of players to make their first appearance in a Panini set, and call them rookie cards despite it not being their rookie season. They probably waited too long for Ford, who was released in May and is now in the Packers system. Croom is still with the Bills. The Ford is the base card, while Croom is a Groove parallel. 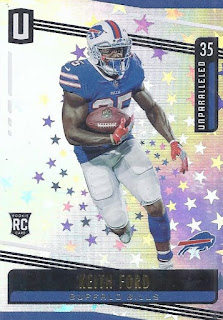 These are the base cards for the actual rookies. Dawson Knox makes one of his first appearances on a Bills card, while the other 4 have made numerous appearances already. 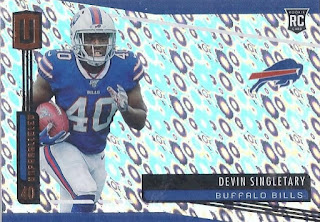 If you want more Unparalleled parallels, here's a Flurry (so appropriate for Buffalo around December) of Devin Singletary. 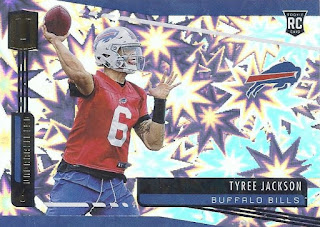 And fresh off leading the team to a 4th quarter win to wrap up a perfect preseason, here's an Impact parallel /75 of Tyree.

Now, I'm ready for kickoff!
Posted by buckstorecards at 05:16