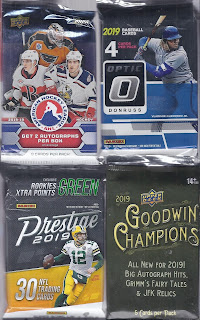 Just a miscellaneous grouping of packs I have busted over the past few weeks, but had yet to show off. 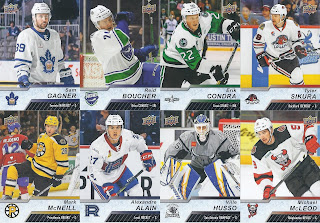 You kind of hope when you bust a minor league pack of cards that you'll get cards of players making their debut in sets. Not so much here with this pack, as only Alain had not had a card at the NHL level. In fact, both Gagner and Condra had rather extensive histories. But at least you have a couple nice celebration photos in the mix. 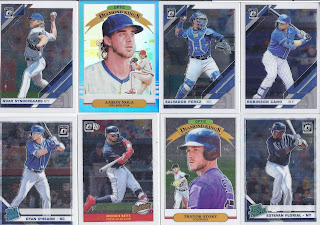 I did well enough in my group break of Optic, so I figured I'd try a couple packs to expand my collection beyond the Jays. A couple Mets, both as the first card out, made this perfectly acceptable for the ol' team PC, and there's a pretty nice shiny /50 parallel of Aaron Nola as well. 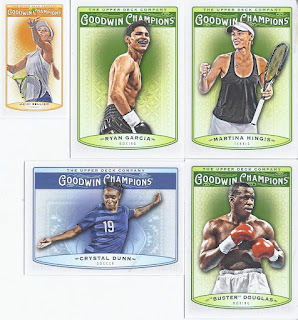 A card of Martina Hingis and a card of Buster Douglas in the same pack? That's either Goodwin or Ginter. 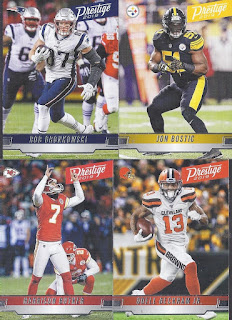 30 cards in the Prestige pack (the only retail one of this break) means too much to scan, so I'll just do the highlights. The first 20 cards in the pack were veteran base, and they started with that Bostic in the corner. Other notables were Gronk's farewell card, a kicker appearance, and Odell getting photoshopped into a Browns uniform. 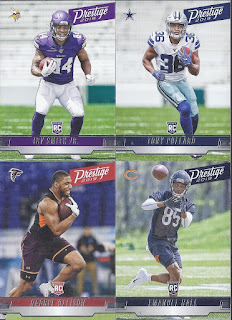 Rookies are somewhat SPd in this, with only 4 cards from their 100 card portion of the set, as opposed to 20 from the 200 card veteran portion. 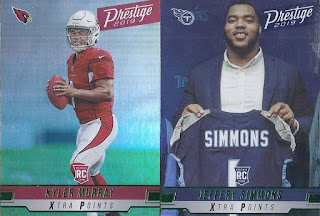 But I guess that's the Xtra Points parallel you want at this point with the Kyler Murray. I also love the 'pose with the jersey' photos more than the practice photos or the rookie premiere photos, so both of these are pretty nice. 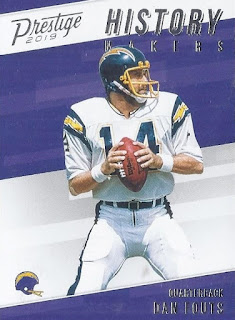 Of the remaining insert cards, I'm going for this Dan Fouts as my favourite for some classic Chargers unis.

And there you have it!
Posted by buckstorecards at 07:44