Let's switch sports and start diving through the piles of Chronicles I hinted at last post. I was in some group breaks, both random and pick-your-team. I busted a couple hobby boxes. So there's plenty of available content. First up, cards from one of the randoms, where the randomizer landed on the Nats. 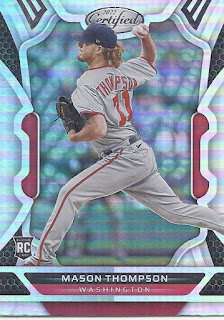 It is a Panini product, so I'll open with a card that is perfect for the product, one that allows for an acceptable baseball photo, with a minimum of logo removal required. 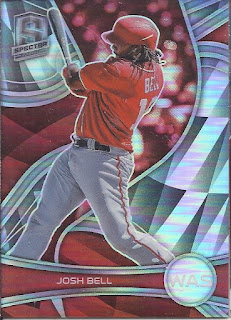 There are some dated elements as well, as Josh Bell can be found in the set with Washington. 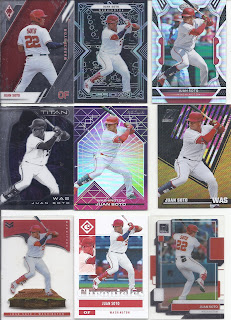 But Juan Soto was the Nationals' king in this set, in terms of volume. With Recon in the middle, the sets seen here, clockwise from the top left are Phoenix, Obsidian, Certified, Zenith, Clearly Donruss, base, Magnitude and Titan. While landing all these cards of a major name is nice, the volume really shows the level of re-used photos in this. I doubt too many people are going to fill up a scanner bed worth of cards of the same player to highlight it. 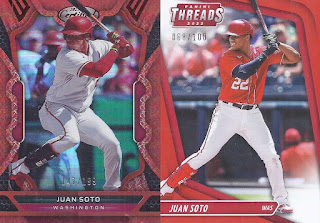 As expected, there are lots of parallels. And nothing beats a  parallel that perfectly matches the team colours. 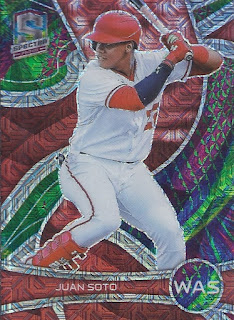 If matching colours aren't your thing, how about gaudiness? This is a 'Meta' parallel. In this set, they aren't numbered. But Meta parallels in other sets are /25. Maybe the numbering scheme is  just hiding somewhere among the background like a Magic Eye puzzle.

I'll get to the Blue Jays stuff in a future post, but for now, here's some cards from an alumni. He went to Washington in  the trade that brought Brad Hand to Toronto. They even opted for a photo where the catcher isn't wearing logo-covering equipment, in a somewhat odd choice. 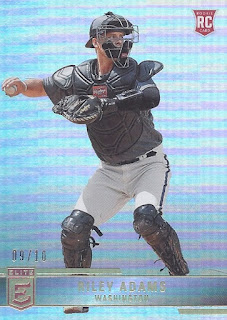 Riley Adams also provided one of the lowest numbered cards of the bunch, with this being a holo foil parallel. The only thing that changes is the foil on the bottom, so if this had been numbered on the back, it would have been a challenge to notice it when busting the packs. 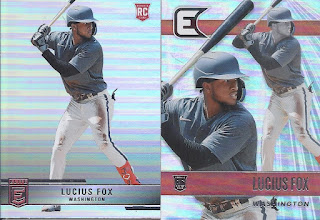 Lucius Fox definitely has the coolest name in the bunch. 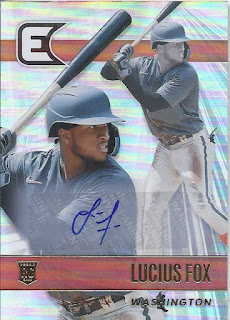 Even if his autograph isn't the best. But, at least penmanship-wise, he won't have the worst of the group. 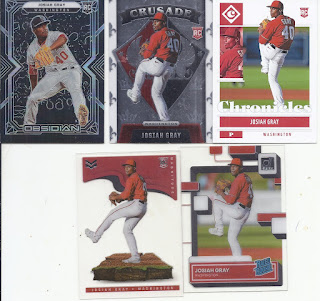 One last player to get to. You do have to compare the leg positioning and how much of the jersey is visible, but at least these are all different photos. Although I wouldn't be surprised if all the red jersey shots are from the same pitch. 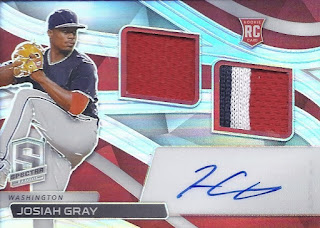 A little patch to go with your autograph? Sure thing! Spectra was one of only a couple sets represented in this that provided on-card autographs. Bonus!

Posted by buckstorecards at 09:10