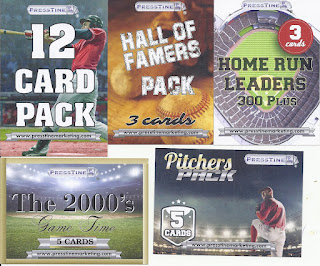 A Surprise Bag of baseball is on tap for today, with entirely repacks as the contents within. As usual, I'm going clockwise from the upper left, with the 12 card pack being the opening one. 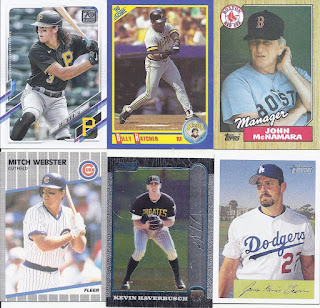 As usual, these go all over the place. Manager cards are always interesting in repacks, and we get some Heritage in there, along with a last name in 'Haverbusch' that just seems like one that would be used when you call up The Tube Bar. "Is Lemmy there? Last name is Haverbusch!" 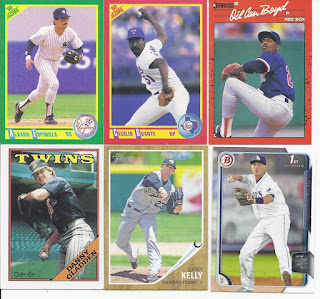 O-Pee-Chee! And Heritage Minors! WOO-HOO! Even it was only the paper version, that Willy Adames would have been a pretty good pull for the time. And now - repack filler. 1990 Score might be to baseball repacks as 1990 Bowman is to hockey ones.

Your Hall of Famers. At least one of the 3 wasn't from the junk wax era, and it is actually a pretty cool looking card of Ty Cobb out of 2003 SP Legendary Cuts.

Not one of these 3 300+ HR guys had hit 300 by the time their respective cards in this scan hit the packs. Pro Visions are another example of the card that would have been a great pull at the time, but has been relegated to repack content. I do like that although the repack salutes home run prowess, it looks like it is some defensive wizardry that is featured on the Bonds card. 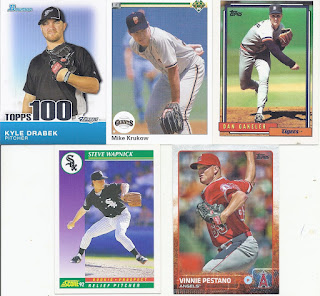 Yes. Those are definitely 5 pitchers. I'd never heard of Wapnick, nor Gakeler before seeing them on these two cards. 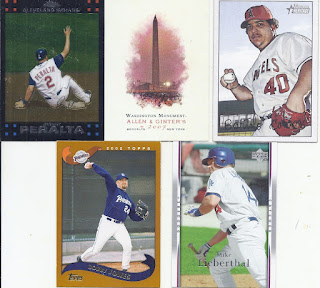 And your 2000s pack definitely wins the battle for the most interesting of the ones in this, even with the Bonds and Cobb appearances. Peralta brings on of those photos that could show up on any Panini card, without necessitating the photoshop crew does much work. A bit of Ginter randomness? Sure! Bartolo Colon is another one of those players that it is always fun to pull a card of, no matter what team or set it comes from. Being a Heritage release does bump it up a bit. Bobby Jones is probably the least interesting one in here, but he's still a former Met. And that Mike Lieberthal is likely what was his only pack-pullable card where he wasn't pictured/listed on the Phillies. He wrapped his career with one season in LA.
There you have it!
Posted by buckstorecards at 12:21