The Chronicles continues to be chronicled. I'm switching away from group breaks to a personal box for the next two posts. But there's still more from the former to come. It is my favourite release of the year, after all. 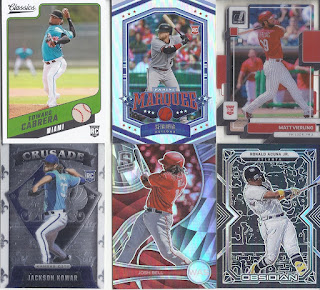 Pack 1! As usual, every card has a different design/set. The Josh Bell is actually a holo parallel from Spectra, and that specific parallel was a dupe from the Nationals random that I showed off earlier. Obsidians, and an acetate card fell one per pack. 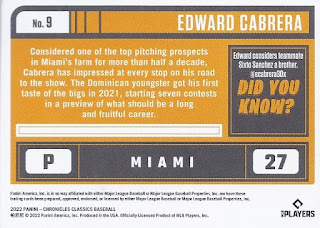 And since Classics included a factoid on the back, I'm gonna show that off too. 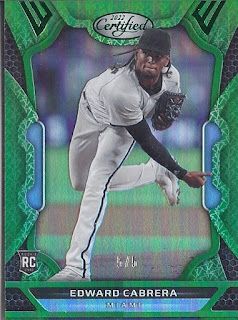 Definitely an Edward Cabrera hot pack, as he appeared on the lowest numbered card of this box, and any of the breaks I was in period. Even if the colours really don't go with the Marlins, that's still a really sharp card. 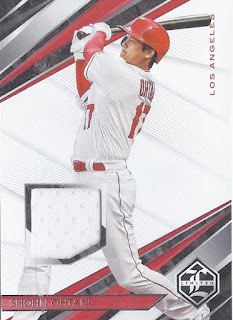 If I'm going to get a plain ol' one colour relic, it might as well be of Ohtani.
Pack 2 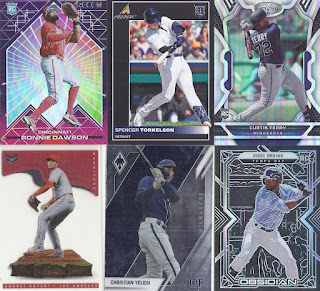 Maybe it is how much they flash me back to the early Skybox releases, but Recon might be my favourite set within the set. Torkelson will be set aside for an Ann Arbor mailer. And there's my second Ohtani of the box. 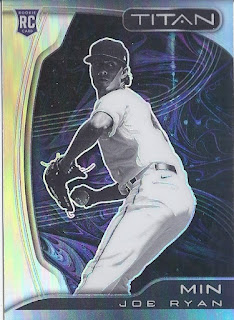 It isn't numbered, but here's the second Holo parallel of the box. 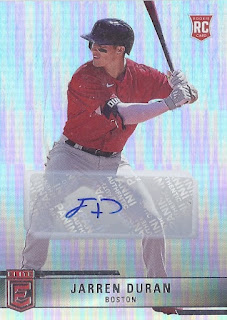 And there's the second hit. And WOW, is that a ghastly signature. I wasn't the biggest fan of the Lucius Fox signature I posted earlier, but at least he would add a line after each of his initials. But at least now I've got an autograph of a guy who is probably better known for losing the ball in the lights and the casual reaction to it, thereby allowing Raimel Tapia to pick up an inside-the-park Grand Slam.
Pack 3: 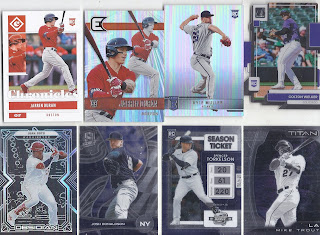 Back-to-back-to-back Durans in this post. Other that a Trout appearance and a second Torkelson for the mailer, that's about it noteworthy about the third and final pack today.
But there are 2 more autographs to come in the next packs.
There you have it!
Posted by buckstorecards at 10:28