Last week, I recapped the 2-14 baseball portion of my to-be-posted box. Today, it is the hockey portion of it, coming from mainly from COMC and sportlots. 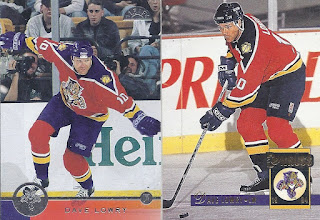 The card with the odd celebration out of Dave Lowry had been on my wantlist for awhile. I finally found a seller through sportlots that had it, was on this side of the border, and with reasonable shipping.  And I could throw in a second one! 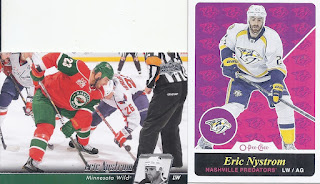 I'm actually surprised that I didn't already have that UD base card of Eric Nystrom from 2010, but there's finally one in the collection. It may not be as interesting as his 'glove' photo from 15-16, but a face-off circle shot is still pretty uncommon on cards. Speaking of 15-16, that's the year that retro parallel comes from. 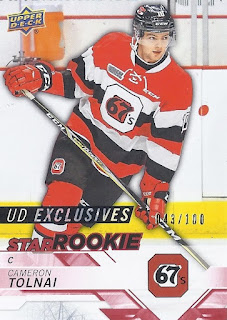 Only one solo addition to the hockey portion this time around, and it is Cameron Tolnai. He's undrafted, and is now playing out his overage season with the 67s. 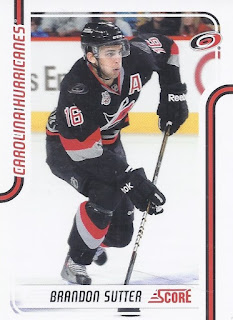 For variety, Brandon Sutter wins among his 4 cards. He's got a parallel, with this being the glossy variation. 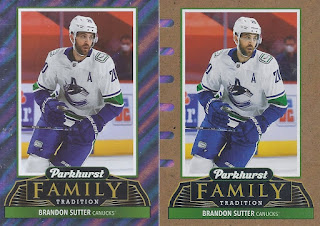 Here he is on an insert, and a parallel of that insert out of Parkhurst. He's no longer on a team, so this 21-22 card will probably be among the last he gets while active in the league. The Family in question here was a game where his uncle Darryl was coaching the Calgary opposition. 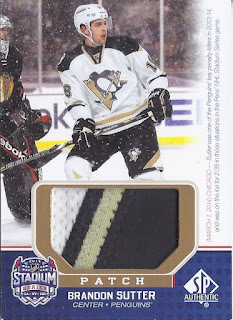 And the big one is this super thick patch out of SP Game Used from 14-15. It also provides a rare situation where there's also an interesting photo accompanying the hit, as the snow is obviously flying during the Stadium Series game at Soldier Field. 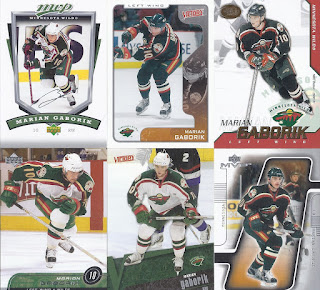 In terms of volume, Marian Gaborik gets 5 new cards. The Calder card in the upper right was a dupe, in a nod to my somewhat questionable record-keeping skills. 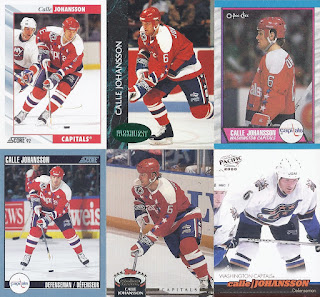 So, that makes Calle Johansson the big winner this time around. I do like that I go both the Canadian and American version of his 1992 Score card put into the binders with the same mailer. That 1989 is, much like that UD Nystrom, one that I thought I had already, but my binders told me otherwise. I had his Topps entry from that year. This puts him at an even 50 cards in the collection.   Milan Hejduk still leads with 253, but Gaborik is close behind with 247.
There you have it!

Posted by buckstorecards at 10:59