The baseball and hockey portions of my recent 2/14 arrivals from my 'to be posted' box were numerous enough to require posts of their own. Everything else is just enough for one post of its own. And here it is! 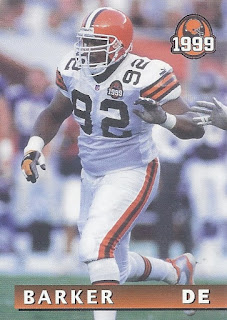 I'm going totally obscure for the football entry, as we go back to the return of the NFL to Cleveland. While Roy Barker wasn't an expansion draft pick, he did end up playing in a dozen games for the team in their first season. He remained pictured with the 49ers on all but this card and its gold parallel, out of a local entry by Giant Eagle Supermarkets. This probably counts as the last card of his career because of that. 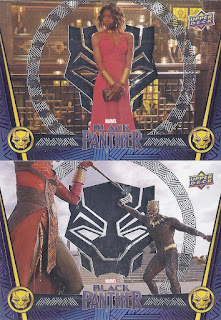 Let nobody say I can't be topical for these. Wakanda Forever is hitting theaters, and I can show off a couple new Dania Gurira/Okoye cards. Combining all her appearances in Black Panther sets, and some from The Walking Dead, Danai is the Queen of the miscellaneous portion of the collection, making 13 appearances in the collection, the same as Barker.  As always, cards of her in the role of Okoye count, but not generic cards of the Okoye character. Makes sense? 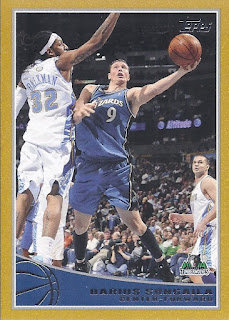 This might not be the most flattering  photo of Darius Songaila out there. He doesn't have the most flattering expression on his face, and it appears that Renaldo Balkman is going to block his layup. This is also the only cardboard evidence that he was affiliated with the Timberwolves at one point in his career. He never played a game for them, being shipped off to New Orleans before the season. The trade to Minnesota included the draft pick that became Ricky Rubio, in return for Mike Miller and Randy Foye. (Ouch) 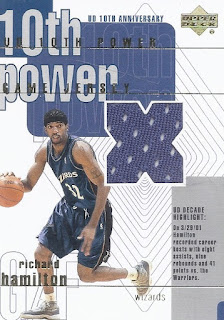 At least this card waited until the end of its season to be out-of-date, as it is from the 01-02 season before Rip Hamilton was sent to the Pistons. Since Hamilton was on his way up, and Jerry Stackhouse started to decline after the trade, this was another 'Ouch' trade in retrospect for the Wizards. In comparison to the Dania Gurira leading the way in the miscellaneous portion of the collection with 13 cards, Hamilton leads the basketball portion with this being #90 in that collection. He'll likely be the next member to push into the triple-digit club alongside Jim Kelly, Marian Gaborik and Milan Hejduk.
There you have it!
Posted by buckstorecards at 05:52