One Card Only: Admirality

While the big draws last season in the NBA were the Zions and Jas of the world, I was more interested in Admiral Schofield, a second round pick of the Washington Wizards. This linked video explains why.

He made an effort to improve his signature prior to signing his autographed cards and stickers by learning cursive! 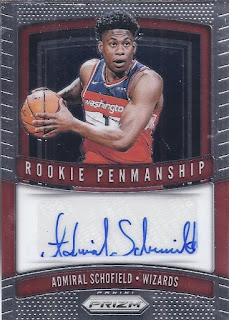 And that's a pretty nice signature, especially considering he had one of the longer names in the 2019-20 rookie class. There were a few attempts at going beyond the initials only, but Tacko Fall was the only one that really looked decent by comparison.

When you're a penmanship snob, you take what you can get.