Today, it is a mix of stuff that I landed through e-packs, whether because it was cheap and interesting to me on COMC, or just through an e-pack opened myself. There were some that fit my PCs (Rangers alum, Senators, and 2/14) that I'll cover when I get to those portions of the shipment. But today, it is some miscellany. 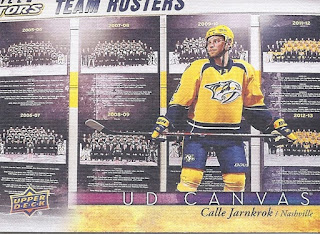 Now that is an interesting way to showcase a team's history on a single card. It is always fun when the glut of Canvas inserts hit the market via e-packs and look for the more interesting ones. 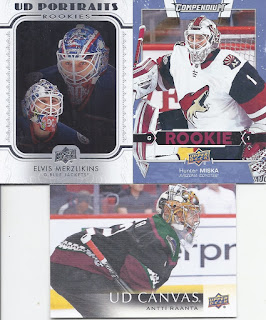 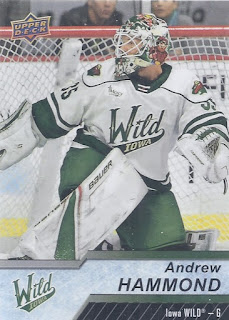 There is just one more mask binder card to show off in this post. Even though he's no longer with a Senator, the outdoorsy Hamburglar mask sported by Andrew still deserves to be shown off on its own. 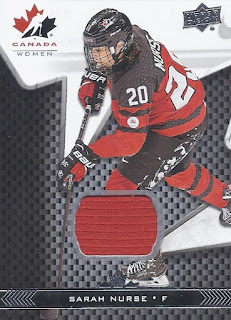 And the last of the "because it was cheap" cards adds a relic of Sarah Nurse to my collection of patriotic cards. Sarah continues the sporting success of the Nurse family, being the cousin of NHLer Darnell and WNBAer Kia. 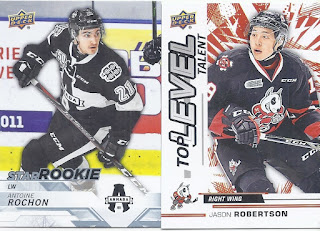 Here's a couple CHL cards from the 18-19 release. Rochon is still undrafted, but Robertson is showing up in 20-21 releases as a member of the Dallas Stars. 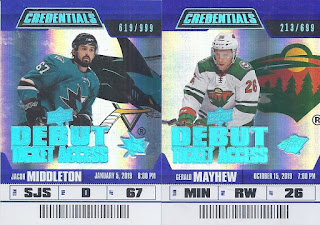 Credentials was on e-pack for a bit, and there did seem to be a good number of cards in each pack that could be turned into actual cardboard. Here's a couple base cards, from the numbered rookies portion of the set. 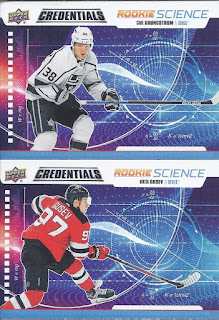 And a couple inserts. There were also a couple hits as well, but those will have to wait until I show off the Senators content in the mailer, and the second will wait for another blogger to show off.
But until then, there you have it!
Posted by buckstorecards at 06:30