Another repack "straight from the source". A simple, 20 card hanger. 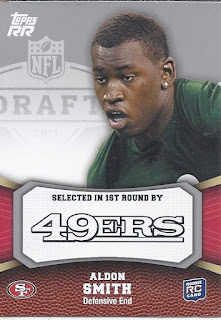 Here's a better look at the first card. Smith was drafted 7th overall by the 49ers in 2011, but has had a page  worth of wikipedia legal kerfuffles since then, to the point he missed 4 years of action due to suspension. He returned this past season with Dallas. 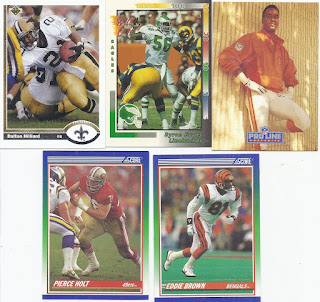 The first grouping of cards - very junk wax with that 1992 of Evans being the latest card. That's Danny Peebles on the Tampa card, who I admit to never having heard of. Dalton Hilliard easily wins the photo battle here. 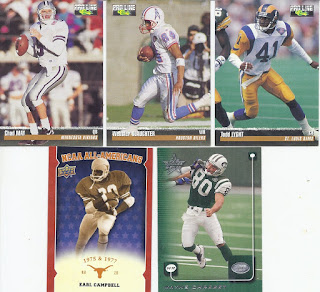 From two-in-a-row from the same set in the first bunch, to three-in-a-row here. Presstine must have gotten a 1990 Bowman hockey-ish deal on those U of Texas cards, because there always seem to make appearances in repacks. 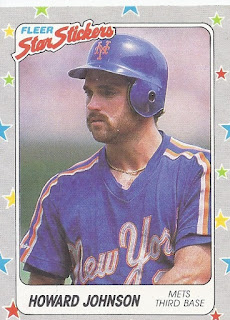 How'd Howard get in this? But at least it is a Mets card...sticker. 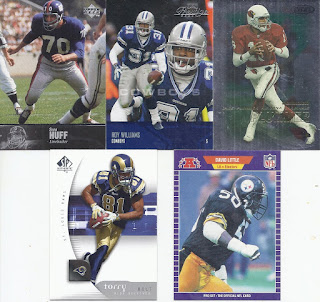 Some nice variety in this group. That Sam Huff card in easily my favourite in this grouping, as not only do they have 2 different images on the front, 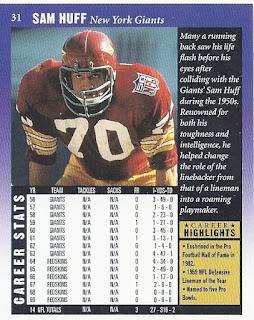 but another one on the back, featuring a different team (albeit one he also spent significant time with). 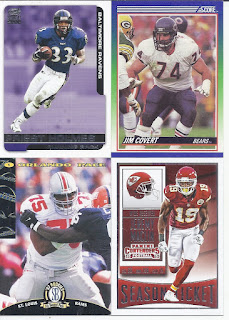 And here's the biggest surprise in the repack - that Orlando Pace card. While he definitely has better options from his rookie year, I was not expecting a rookie card of one of a #1 draft pick, and one of the top offensive linemen of all-time. The Maclin was the visible card on the other side.
There you have it!
Posted by buckstorecards at 09:57