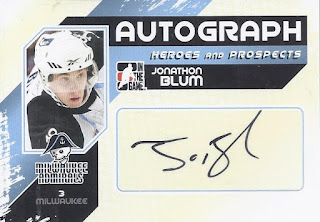 Finally, the first hit of the box! Blum spent a few up-and-down years in the league with the Predators and Wild before heading overseas. Considering that there are guys in this product that never sniffed the league in the first place, that's a decent enough hit. 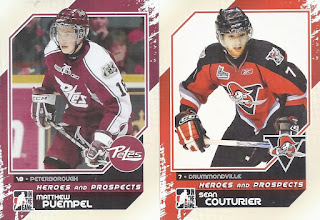 A future Sen and a Kitchener Ranger player to start this pack off, and there's also one of the three cover boys from the box. The Voltigeurs is another favourite CHL logo of mine. 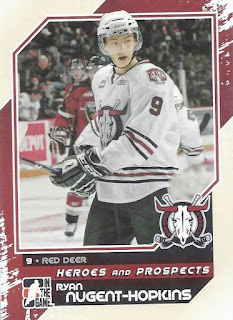 Here's a pre-NHL card of the Nuge. 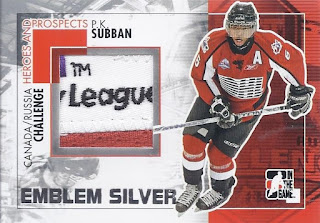 This was definitely worth the wait for the first relic of the product. The silver emblems aren't on-card numbered, but are supposedly limited to 3 each. And I will have no complaints if the guy that I end up with the relic of is PK Subban. Since the photo on the card is from the Canada/Russia challenge game, and that's what the swatch is from, you can actually spot the spot on the jersey where the CHL patch comes from - as it is visible right there on the shoulder. That's a beautiful relic card! 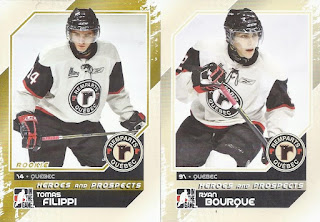 Pretty much anything would be a step down from that last pack, so I'll just say this was a Quebec Remparts hot pack. 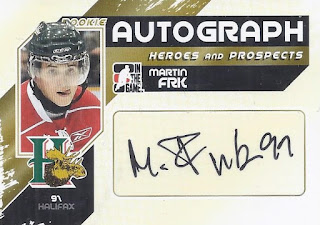 Here's auto #2. I remember absolutely nothing about Martin Frk except the 'buy a vowel' quality of his last name. He's still playing on this stide of the Atlantic, and is in the Kings system. 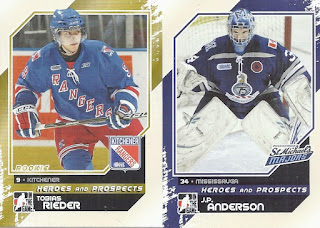 Another Rangers card. Also another alternate jersey, as several teams break ones out for the game closest to Remembrance Day, making this very similar to the Scott Glennie one from yesterday's post. 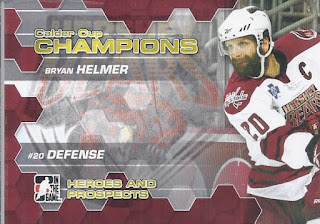 You're promised 3 non-hit inserts in the box, and here's the final one. This is somewhat interesting, as Helmer was pretty much an AHL lifer at this point, playing in over 1000 games, but he did spend just under 150 games in the NHL. He's a member of the AHL Hall-of-Fame, and with there also being an insert set dedicated to the 75th anniversary of the AHL, it is kinda appropriate that this Calder Cup champions card is of him. 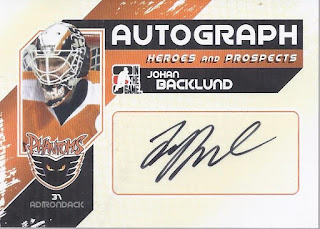 Bonus auto! WOO-HOO! Not the most illustrious career, though, as his NHL experience was limited to one game. 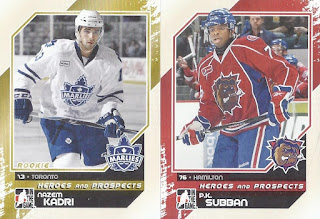 Well, two of the big cards in the set show up in the final pack with Subban and Kadri. There were no dupes as I went through this, meaning I was only about 10 cards short of the base set. 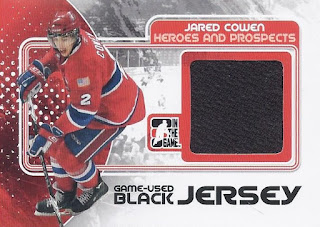 Here's the final hit. It might be a one-colour swatch, but it is supposedly a Senators swatch, so I like it as the final hit for the box.

And that's the box. But I still have the 50 card update set to post!
Posted by buckstorecards at 08:48