Mailbag - Waiting 'til Next Year

Cracking open the mailbag again today, and a return mailer from Tom @ WTNY. 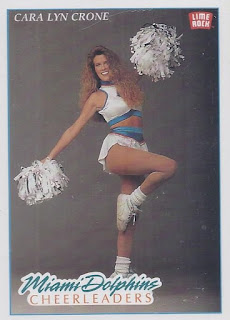 He had mentioned going to sportlots to hunt for some set builders that he was going to get sent via their mailbox feature. Around that time, I learned of this card and arranged to have it included in the shipment, especially since the only seller shipping to Canada charged $20 for shipping a single card.

I did a quick google search on Cara, only to learn she's now Cara Tuveo, and there were several references to Miami Dade Corrections. Fortunately, they are her employer, not her landlord. She's the second cheerleader in the 2/14 collection, joining Amanda from the Jags out of 2009 Topps. 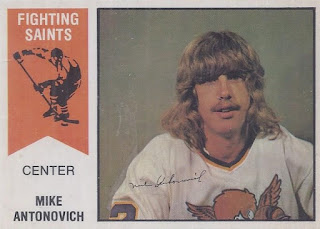 This great WHA card was on my 'somewhat unreasonable' wantlist, until Tom knocked it off. Mike is doing his best impression of every high school drug dealer who'd sell out of his Camaro.  Sadly, Mike isn't the biggest fan of the photo. From Ken Reid's "Hockey Card Stories":


"A lot of people send me that card to sign. I always want to burn it but I always send it back."

Bah. This card is marvelous! Even moreso with the hint of team logo. 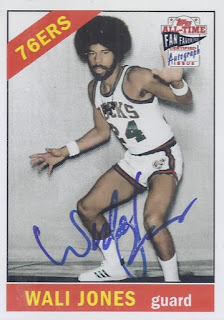 I'm staying with the 2/14 collection with this, and the second of two less-than-reasonable requests from that want list. This is my 6th, and likely final card of Wali Jones (or Wally) in the collection, as the only one left out there of him is a local release out of Philly. I'm also amused that this is a modern card, but that he is pictured with the Bucks, but listed as with the 76ers. Even stranger is that he played on the 76ers before going to Milwaukee, and not prior. So this doesn't even give you the vibe of a 'now with' card. 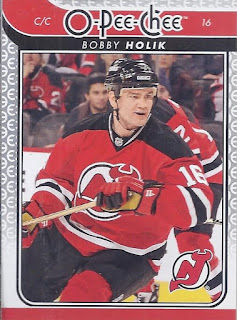 As I stated above, there were set builders in this. Sadly, not completers, as I was inept in organizing my list. But major damage was done to both 09-10 OPC and 18 Optic. I'm scanning this Holik, because I seriously had no idea he was still getting current cards in 09-10.

Thanks for all these, and I'll be hunting for Cubbies at the Expo, and can hopefully hit you with some 70s O-Pee-Chee!
Posted by buckstorecards at 05:45